Writing: where I am now

In his amazing book ON WRITING, Stephen King describes creating a story as sculpture. I specifically remember him comparing writing to sculpting an elephant out of marble, but my mind could have added those details (oh how I miss my library sitting in storage in Chicago!). Anyway, what King's basically saying is that the elephant is already there, buried within the marble. It is the sculptor's job to chip away the stone and uncover it.

This gets into all sorts of Jungian philosophy about where story comes from, but the metaphor has stuck with me because it rings true for my writing, especially in the midst of revision.

For me, revision is a fine line between being brutally honest with myself about the parts of my story that don't make sense, but at the same time being true to my initial vision (my elephant). If I don't cut off the nose that's way too long for the body, I'll never discover the short stubby nose in the marble below, the nose that was meant to be all along.

Now that I've probably completely lost you in metaphor land, let me explain what this means for me in a practical sense as I work on revising my current novel's first draft. I have done most of the big work in pulling my plot together. There are still holes, but I believe (hope!) they're not integral to the plot; they can be patched over as I work through the novel a second (or third or fourth or fifth) time. To keep myself on track, I've made a list of issues I need to address for this revision, and have been practicing "revision triage". First on that list was Isabel's emotional development (I blogged about this work here). I went through the first third of my novel, looked at chapters from Isabel's point of view, and made sure her emotions were consistent, developing, and fully explained. While doing this, I realized Isabel's Mom's emotions weren't consistent, so I fixed those next. Then I looked at chapters with Isabel, but which weren't from her point of view, to make sure those were consistent as well. Yesterday I checked to make sure each Isabel chapter had an interesting beginning, an increase in intensity as the chapter went on, and ended on a cliffhanger. Today I'm working on setting and timing. If she gets up at 5:30 AM and sits on the roof for an hour, would her brother be up when she went back downstairs? Would the sun be coming up yet? Also, what does her bedroom look like? I'm hoping to add all these details today. Then comes the moment I'm dreading. Tomorrow I'll need to rewrite all of these four Isabel chapters to make sure everything I've incorporated comes together in one seamless voice and story. Then I'll move on to my next character.

I'm working this way because if I try to do the whole at once, I get caught up in small details and I lose sense of the bigger picture. Starting tomorrow I'll be able to focus on details, knowing the bigger picture (my elephant) is already sketched out. 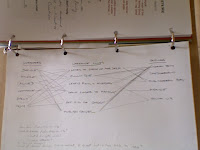 Meanwhile, I'm also working on two other projects (for someone who's not good at multi-tasking, that's pretty good, huh?!). I'm playing with ideas for a new story and fixing an older piece. I love the concept, the themes, and the story, but as a whole the older piece iss still a bit of a mess. I tried a great exercise yesterday from Donald Maass' WRITING THE BREAKOUT NOVEL WORKBOOK (which people kept recommending to me so I finally broke down and bought it!). It involves creating novels (think thrillers) where at the end the three separate plot strands all come together and you realize they're all connected. Maass suggested writing down your five most major characters, plot strands and settings, and then drawing circles and arrows between them. The writer is supposed to look for surprising connections, ways to draw things together that they hadn't thought of before. It was a really useful exercise for me and I learned two very exciting things:
Again, like with the elephant, I often find that. I rarely have new ideas, just better ways of getting at my original vision.

And now it's almost noon here in Bristol and the predicted rain has not materialized, so I think I'm going to take a well-earned break and go on a walk!
Posted by Anne M Leone at 5:38 AM