Last night was my first return to Bath Spa since my interview. Classes don't start until next week, but Thursday evening was registration, a brief IT introduction, and a welcome reception.

I was nervous about this all week. What will my fellow students think of me? What will I think of them? What if this whole thing turns into a big mistake?

My biggest moment of panic was when I got off at the bus stop, on a lonely highway eventually leading into Bath's city center. It's only a two minute walk from Bath Spa's main entrance, but I couldn't remember which way it was and panicked. "Oh God, I'm not going to make it because I'm going to get lost somewhere along a random highway in the middle of no where and I know I'm going to start crying!" Then I saw a road sign and with much relief walked up to the main entrance. Phew, no tears.

As soon as I started up the road to Bath Spa's Newton Park campus, I knew I'd done the right thing. I know that sounds strange, but it felt so incredibly right. The campus could not have looked prettier. Rolling hills spread out in the distance, dotted with stone houses. The sun was setting over the trees. Sheep were grazing alongside the road. Sheep! Next time I'll bring my camera, promise. But even if it rains every time from here on out (and it probably will), last night I felt like I was exactly where I needed to be. Sometimes nature just feels that way to me. I trust it.

No camera, but here's a picture of the hills from Bath Spa's website:

Oh, and here's the castle. Yes, there really is a castle. I have classes in it. Phbbt!

Twenty minutes later (it's a long walk up), I made it to the library. Three cows were grazing in a fenced area outside. Registration was a breeze. No one beat me up and stole my lunch money, no one demanded to fingerprint me, people were instead kind and friendly. I even met a fellow student from Bristol who offered to give me a ride home later that evening.

The IT session was randomly run by American novelist Mimi Thebo, and I must say it was definitely the funnest* IT session I've ever been to.

Then Mimi, much of the rest of the faculty, and all of the new students (Writing for Young People was combined with Creative Writing and Scriptwriting) met for a welcome reception. I had the opportunity to meet most of my classmates (there are about 15 of us total), which was so reassuring (again, no one beat me up!). Actually, the best part was when I realized I was in a room full of writers. We chatted about the opening to Meg Rosoff's HOW I LIVE NOW (is it too conversational? Would a British boy really act that way?), about how she's a brilliant speaker, graphic novel art, how we had learned about he program, what types of writing we were doing. It was just talking shop, but such a rare treat! When I got home that evening, I found myself less scared and more super excited. Plus, my husband glanced at me and said, "You look nice," which is always good to hear.

So in conclusion? I think it's all going to be okay.

Stay tuned: today the IOC will announce the 2016 Olympics host. Will Chicago (my former home) get it? Not sure if that would be a good thing for the city or not, but if they do, then I'm cheering loudly. 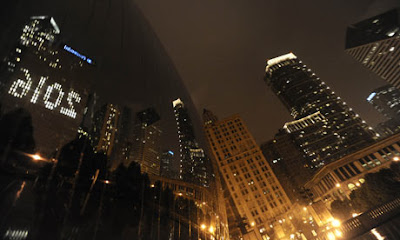