Anne Reads Books By & About People Different From Her: Scorpions

I'm a little embarrassed to say I hadn't read any Walter Dean Myers until I read SCORPIONS this past week. Luckily my library had this oldie but goodie on hand. Now I'm eager to read more Myers.

SCORPIONS won the Coretta Scott King Award and was a 1989 Newberry Honor Book. It takes place in Harlem and centers around a friendship between Jamal and Tito. When Jamal's older brother, Randy, is imprisoned, Randy's gang, the Scorpions, approach Jamal to offer him a leadership role in the gang, the potential to raise drug money to pay for a lawyer for Randy, and a gun. Jamal and Tito have never held a gun before, and don't know what to do with it. They carry it around in a paper bag, bury it in the couch at Tito's house until his grandmother discovers it. It's this heartbreaking naivete combined with a very real, inner city situation that really moved me. Myers is also especially good at setting. I was always aware of the city in the background, the rich people's yachts, the homeless people, the danger of the wide open, dark city park.

When I read meaty books for children, my first reaction is always the same: I wish I could teach this. There would be so much for my former students to discuss in this book, and Myers delves into each character's background, emotions and needs. Also, the characters don't necessarily make the "right" decisions, so rather than being a book about good kids (those books begin to grate on me), it's a book about real kids.

Finally, one last thing I found fascinating about SCORPIONS: Jamal is 12. Technically, in today's publishing parlance, that would mean it's a book for 9-12 year-olds. Admittedly the book was first published in 1988, but still. I assume Myers knew what some 12 year-olds were going through and wrote this about and for them. But I can't imagine any school that would feel comfortable giving this to a child younger than a teenager. And that seems a shame for all those kids who do grow up in situations like this. But I also know that sometimes the kids who really need these types of books find them anyway.

For the rest of February, and beyond, I'll be continuing Anne Reads Books By & About People Different From Her.

I'm currently reading THE BRIEF WONDROUS LIFE OF OSCAR WAO by Junot Diaz.
"Oscar is a sweet but disastrously overweight ghetto nerd who from the New Jersey home he shares with his old world mother and rebellious sister dreams of becoming the Dominican J.R.R. Tolkien and, most of all, finding love. But Oscar may never get what he wants. Blame the fuku a curse that has haunted Oscar's family for generations, following them on their epic journey from Santo Domingo to the USA. Encapsulating Dominican-American history, The Brief Wondrous Life of Oscar Wao opens our eyes to an astonishing vision of the contemporary American experience and explores the endless human capacity to persevere and risk it all in the name of love." (from Goodreads)

I also picked up from the library yesterday:

TEN THINGS I HATE ABOUT ME by Randa Abdel-Fattah
"Ten Things is about Jamie, a teenage girl from Sydney’s south west who lives two lives: at school and in the outside world she is ‘Jamie’, a bottle-blonde with an apparently Anglo Aussie background; at home she is ‘Jamilah’ a Lebanese-Muslim who is proud of her cultural identity. Jamie struggles to maintain her two personas as the rules of her over-protective father collide with the normal adolescence she perceives other teenagers to have and which she so desires."

By the way, I LOVE this UK cover: 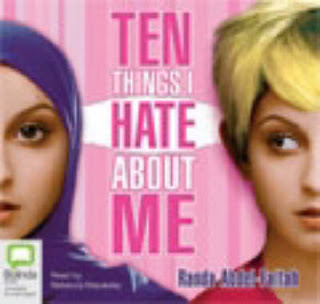 THE LAST OF THE WARRIOR KINGS by Sarah Mussi
"A snowy evening, South London. Max Wold and his brother Angelo see a hooded gang ominously tracking a well-known rapper, Mogul King, through the dark streets. Minutes later, Mogul King presses a parcel into Max's hands. Within hours two people are dead and Max is running for his life. And everything leads to the fabulous Benin Bronzes looted frm Nigeria over a hundred years ago." (From the back of the book)

ABLEA: THE GIRL WHO SAW LIONS by Berlie Doherty
"Abela: the Girl who saw Lions, is actually the story of two girls. One lives in Tanzania, the orphaned child of a family stricken with HIV/Aids. When her uncle sends her to England, her grandmother thinks she is going to a better life; but he is involved in child trafficking and Abela faces a bleak future as an asylum seeker. Her mother’s dying words to her had been ‘Be strong, my Abela, be strong,’ and this inspires her with the courage to survive. The other girl is Rosa, who lives in Sheffield with her mother. They do everything together, including learning to skate at IceSheffield. Rosa can’t imagine anything changing in her life, until one day her mother tells her she is thinking of adopting another child. Rosa is devastated. 'What if I had said to her, ‘I’m thinking of adopting another mother?'" (from Doherty's website)

You reading anything good? Any recommendations?
Posted by Anne M Leone at 2:00 AM