Two interesting tidbits about the publishing industry which I have learned by living in the UK:

Why? I have no idea. 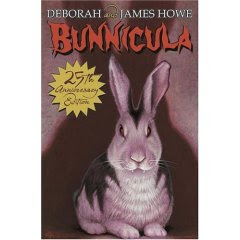 Perhaps it's cultural. Maybe BUNNICULA is too American?** Shel Silverstein is too hard to translate into British English? Except then how does one explain the success of the Simpsons on British television? Or HARRY POTTER in the US? Course Harry had to be Americanized, his trainers made sneakers, his snogging kissing, but that's a whole other issue.

Or perhaps it has something to do with marketing. Maybe publishing houses spend more time on their homegrown authors and trust an author's first publishing house has done enough marketing to sell a book in another country.

I've done my part! I've bought UK versions of numerous ya titles including Melissa Marr's WICKED LOVELY, Kristin Cashore's GRACELING, Libba Bray's A GREAT AND TERRIBLE BEAUTY and THE SWEET FAR THING. I believe WICKED LOVELY was the only one of those books (all successful in the US) that I was able to find on a bookstore shelf. Frequently I end up buying the American books I drool over because they're unavailable at my local library.

It travels both ways. Some of the most popular children's authors in the UK (David Almond***, Meg Rosoff, Jacqueline Wilson) I had never heard of until I moved here. My classmates were in utter horror when I told them I had never heard of Jacqueline Wilson. And not that I'm the be all and end all of book knowledge. Surely librarians and publishers and agents may have heard of these authors. But as a regular reader, especially of children's books, I find my lack of knowledge really surprising.

So... why is this? If publishers go to the trouble to buy these books, why aren't they marketing them? Or if they are, why isn't the public buying them? I imagine as we become more and more of a global society, trends will follow from one country to the other. Indeed, isn't that what happened with Stephenie Meyer's books, which seemed to be an overnight sensation?

And here's the good news. There's a wealth of incredible authors in both countries. And Americans... you haven't read a lot of good stuff over here. And Brits? You're missing out on same amazing writers. And even better? I'm like a kid in a candy store having lived in both countries. So I'd like to take this a step further and start highlighting British authors I've discovered while living here that my American readers might not know about. First on the docket will be the renowned Jacqueline Wilson.

To my British readers, if you have any suggestions of authors I should blog about, please let me know. Also, if ANYONE can illuminate me on the success of books published in both the US and the UK, I'm all ears.

One final thing: "American and English books have different covers to appeal to the tastes of the two different nations. Question is, which do you favour?" I thought this quiz was really interesting. Strangely I seem to be 9/10s British.

* No, I don't have stats on this, though I'd love to see them. The most obvious recent examples I can think of where books have been successful on both sides of the Atlantic are are Stephenie Meyer's TWILIGHT, J K Rowling's HARRY POTTER and Philip Pullman's HIS DARK MATERIALS. There may be others... I know Maggie Stiefvater did a book tour this past autumn and I have been able to get both her SHIVER and Sherman Alexie's THE ABSOLUTELY TRUE DIARY OF A PART TIME INDIAN from my local library.

**I originally intended to dress up as Bunnicula last Halloween. None of my classmates, even my tutor, knew what I was talking about.

***Since moving, I have heard some American buzz on Almond from my favorite children's librarian (Hi Cynthia!) and agent Michael Bourret. So he is getting some publicity in the US. But does the general reading public know about him yet?
Posted by Anne M Leone at 2:00 AM

Labels: books, publication, UK, US, ya