In the next few weeks, I'll be highlighting some well-known British children's writers. Many of these authors I had never heard of until I moved here, and it has been a pleasure and a learning experience to become acquainted with them. First on the docket:

Jacqueline Wilson is probably the most famous British children's writer alive today. She is incredibly prolific and has written almost one hundred books, frequently two a year since the late 60s. In the past decade, her books have been borrowed from UK libraries more than that of any author (16 million times since 2000). Of those 16 million, the most checked-out book has been her 1991 bestseller THE STORY OF TRACY BEAKER.

Genre: Wilson writes middle-grade (8-12) realist books. The books are almost always written in first person and feature female main characters (a boy main character only appears in two of her books). Her novels tend to focus on issues such as adoption, divorce, mental illness and abuse.

What's in her books for writers?: Wilson captures quirky characters well, but also realistically. Even in a short book with only one main character, all of the secondary characters will have emotional journeys as well. That said, she doesn't overwrite. She captures a character or an issue with just a hint or small detail. For her main characters, the stakes are always high.

Quotes: I love this moment in THE SUITCASE KID (page 22) where the main character explains how since her mom's remarriage she no longer has any space to call her own.

"So do you know where I go when I need a bit of peace and quiet? I lock myself in the bathroom.

"There aren't any really good places to sit. The toilet gets a bit hard after a while. The edge of the bath is too cold. I wouldn't dream of sitting in the bath. I always just wash in the basin. The baboon [step-father] has a bath every day and he leaves dark wisps of hair all over the place, and little crumbs of plaster and flakes of paint.

"I collected some of his foul scummy hairs in a matchbox, together with a nail clipping and a shred of one of his dirty tissues. Then I concocted an evil spell and threw the box out of the window. I waited hopefully all the next day for the news that he'd fallen off his ladder. But he didn't. Magic doesn't work. I should know that by now. I wished enough times that Mum and Dad and I could be together again in Mulberry Cottage and it hasn't happened yet."

What's the buzz?: Well, any author who has sold over 25 million copies of her books in the UK alone is clearly doing something right. I've heard that young girls gush and fawn over Wilson as if she was a rock star. Many adults have fond memories of growing up reading Jacqueline Wilson. Though no feature films have been created based on her novels, there have been numerous TV adaptations. She was the UK's children's laureate from 2005-7 and in 2008 was made a Dame Commander of the Order of the British Empire (for my non-British readers, basically that means she was knighted and can use the title "Dame").

However, there is also a lot of disdain directed Wilson's way, seemingly for a variety of reasons. Some believe her books to be poorly written, saying many use a similar first person voice, overly simplistic language and resolutions. Others seem to object to her focus on class and poverty, or see her topics as inappropriate for children. Fair? True? What do you think?

US vs UK cover: 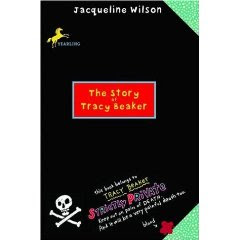 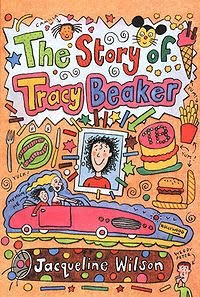 Other authors you would like me to cover? Please let me know in the comments.
Posted by Anne M Leone at 2:00 AM