In the next few weeks, I'll be highlighting some well-known British children's writers. Many of these authors I had never heard of until I moved here, and it has been a pleasure and a learning experience to become acquainted with them. 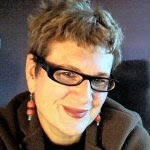 While Meg Rosoff doesn't share the fame and popularity of Jaqueline Wilson, she is a celebrated and much honored UK author in her own right. She happens to be American (shhh...), but has lived in the UK for the past twenty years.

Genre: While Rosoff has written some picture books, she is known for her teen novels, which encompass several genres (contemporary, historical, romance, dystopian). She is published as an adult novelist in the US.

What's in her books for writers?: Some of the most beautiful, breathtaking prose I have ever encountered. All of her novels celebrate the natural world and how it both highlights and contrasts our chaotic lives. Rosoff's novels are also quite intellectual. She asks questions about fate and gender and life's purpose and doesn't shy away from her character's philosophical journeys. Along these same lines, she doesn't follow the confines of genre, or even traditional storytelling. Her first novel, HOW I LIVE NOW, started as a romance and about halfway through changed into a dystopian war novel. She not only challenges her readers, but also her publishers. As the Observer reviewed HOW I LIVE NOW in 2004: "Though billed as a book for older children, the novel is full of shocking events - underage sex, with a whiff of incest, appalling violence." Yet she continues to be published, widely read, and celebrated.

"As they neared the end of the beach, Justin drifted closer to the sea, where the pebbles glittered in the last low rays of the sun. And then without any signal or obvious sign of transformation, the beach was suddenly alight with fiery stones. Where seconds ago he had seen nothing, they now glowed against the opaque shingle like little beacons.

"Hands trembling, Justin picked one up and held it to the light. The complex centre revealed itself at once. He closed his fist round the ancient drop of sap, smoothed by the sea and set alight by the sun. It was light and warm in his hand. In a burst of excitement, he picked up one after another until he held twelve glowing drops of flame. Each revealed a different internal landscape, from palest yellow to a reddish marbled gold.

"And then the sun moved and they were gone.

"He searched the shoreline, frantic, in vain. The sun had dropped below the horizon and the entire beach was thrown in shadow. Justin stood motionless, watching the glow fade from the sky, taking with it the last flickers of warmth."

What's the buzz?: Rosoff broke onto the scene in 2004 with her first novel, HOW I LIVE NOW, which snagged the Guardian Children's Fiction Prize, the Printz Award in the US (the same award Libba Bray won this past year!) and a nomination for the Whitbread Award--incredible prestige for a first time novelist. She followed this success when her second novel, JUST IN CASE, won the Carnegie Medal.

Rosoff is highly respected in intellectual circles and is also considered a gifted (and personable) speaker. I have heard some express frustration that her British characters don't ring true and that sometimes her novels are so philosophical that story and reality become secondary.

Personally? I didn't set out to, but somehow I've managed to read all four of her teen novels. They're just so thought-provoking and beautiful and I continue to absorb each one I stumble across.

THE BRIDE'S FAREWELL, Rosoff's most recent book (and I believe my favorite, though I also quite like her first, HOW I LIVE NOW).

Further info:
Meg Rosoff's Website
Observer article reflects on her life, her inspiration for her novels, and her second novel, JUST IN CASE.

Other authors you would like me to cover? Please let me know in the comments.