I love London. I actually lived in London, in Bloomsbury, for a semester while I was in college. Some of my happiest memories are in London. So it was such a treat to come back to London to celebrate my first book launch (hopefully there will be others to follow!).

Also, while I booked one of the cheapest hotels I could find in the area (not like we were there for the hotel!), when Phil and I arrived we learned we had been upgraded to a king-size suite in the four star hotel across the street. See, London loves me, too.

Then we got dressed and made our way to the party at Foyles bookstore.

The absolute best part of the evening was meeting my fellow writers: the others in the Undiscovered Voices anthology, as well as the Saras (Sara Grant and Sara O'Connor, who have made this entire thing possible and provided unbelievable amounts of support), and writers from Undiscovered Voices 2008: Candy Gourlay*, Steve Hartley, Harriet Goodwin, Sarwat Chadda. I believe they were more excited for us than anyone, as they knew exactly how much their lives had changed since UV 2008. 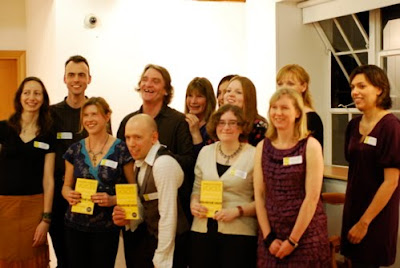 After the book launch, most of the group described above went to dinner together. Such a wonderful opportunity to get to know each other, to talk about writing, life, where to get good Mexican food in London... Suddenly I had a writing community, friends, and it was such a lovely thing.

Well, I suppose you want to know about the rest of the launch? 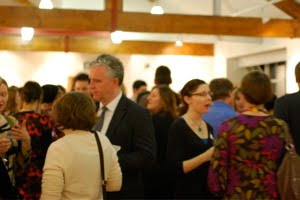 I'm not beating around the bush, the launch itself was great, too (though I wouldn't call it exactly fun). At times it was a little stressful, staring through the crowds at others' chests, looking for badges which read A (agent) or E (editor). But it was such a wonderful opportunity to meet agents and editors, so many of whom had such lovely things to say about Adele. Everyone remembered the ghost story, and some even sought me out (as opposed to the other way around!), which did great things for my confidence. Also lovely to have agents and editors want to talk about my writing career, my future projects, my work at Bath Spa. How cool is that?

Some of my fellow UVers have already signed contracts with agents. How exciting!!! I'm so thrilled for them. A little disappointed for myself, thinking of what could have been, but I wouldn't change this work I'm doing at Bath Spa now for anything, and I know that when I'm ready to send a novel out (hopefully this autumn) I'll have numerous contacts eager to see the full manuscript. 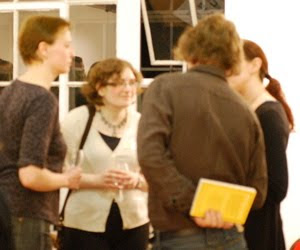 This is me talking to Harriet Goodwin (left), one of the members of Working Partners (right), and yes, Melvin Burgess (center).

I should mention the pictures (except the one of Foyles, courtesy Google Images) were all taken my by amazing husband, Phil. I should also mention that yesterday was Phil's birthday. What a crummy birthday when it's all about your wife, huh? But he was brilliant. He took photos, acted as my mind when my mind was fully engaged elsewhere, kept track of my umbrella, my train tickets, the hotel keycard, etc. At the dinner, Candy made a toast to all the +1s (each guest of the UVers wore a badge that read +1). After all, as she said, it's the +1s who have done so much to support each of us and we wouldn't have been there without them. So true. 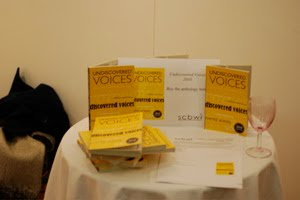 *The amazing Candy Gourlay has also blogged about the night! Check out her blog post for many more pictures, including one of my husband with camera in tow and a video of Melvin Burgess' speech.
Posted by Anne M Leone at 1:58 AM