Apologies for my absence on the blog. I just returned from a week in Finland. The trip was an odd combination of work and tourism. Phil was working every day, so he couldn't go play with me. Helsinki isn't a very big city, but we were a bus ride away from the downtown. My trip also coincided with the midsummer holiday, so everything was closed for two days. My days weren't action packed, but I wrote a bit, took long walks in the forest, sat by the sea, and ate lots of salmon and blueberries. It seems to have been exactly what I needed. I'm feeling recharged and ready to dive into work again.

I also had the opportunity visit the Ateneum, which is Helsinki's art museum. If you ever happen to be in Helsinki, GO. It's one of the best art museums I've ever been to. It's quite small (I saw everything in two hours), and the art is almost entirely Finnish. However, that meant I could happily see everything and see art I had never seen before.

I know next to nothing about art, but I find it incredibly inspirational. Here are a few of my favorites (Click on the images to enlarge). 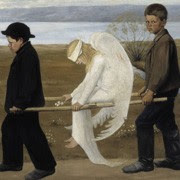 The artist is Hugo Simberg, who does lots of paranormal / fairy tale type pieces. This one especially looked like it had a story to tell. It's called something like The Wounded Angel. Aren't the expressions on the boys' faces intriguing?

This is a depiction of the Finnish story of Aino, who was promised in marriage to an old man. She escapes from him by turning into a sea nymph/salmon. The artist is Akselsi Gallen-Kallela. As I understand it, in the first panel Aino is dreading her marriage. In the third panel she's watching the fish and considering her options, in the middle panel she's escaping. 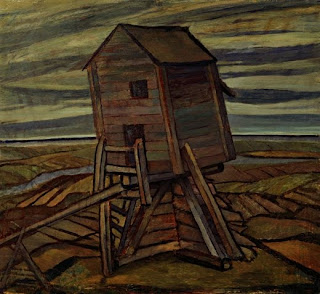 The artist is Vilho Lampi. This actually isn't one I saw at the museum, but it's another Lampi in a similar style. I love these paintings that make the reader look and look and look.

The museum was having a special exhibit on the women of Helsinki in the early 1900s, the things they would have experienced and the society they would have been familiar with. The exhibit included numerous female painters of this generation, and my absolute favorite was Helene Schjerfbeck. 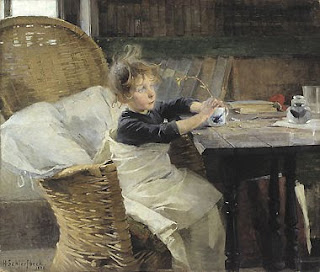 This is one of her most famous paintings, The Convalescent. Apparently, Schjerfbeck was a convalescent as a child as well. 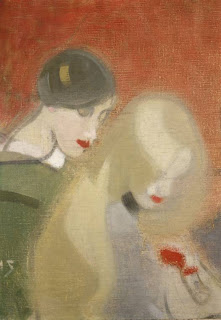 This one was one of my favorites. I love the vibrant red. It also looks like it has a story to tell. It's called The Family Heirloom.

I should be back to regular posting this week.
Posted by Anne M Leone at 2:00 AM