I've been writing like a madwoman lately. I've hit a few chapters in Project Sparkle that needed to be completely rewritten, and the farther along I get in the book, the more I'll need to do that. Worse, with every chapter I rewrite, I worry I'm losing precious words and replacing them with mediocre, rushed ones. But at least the plot is beginning to take a much better shape and I'm still on schedule, though barely. I've been spending a fair amount of time looking at the calendar, counting days, counting again, and groaning.

So that's a long way to say that's why I haven't been blogging much lately. All my writing energy has been devoted to Project Sparkle and there's just nothing left to share. Good news in the long run, I hope!

But in the meantime I'll post a few Finland pictures:

This is the harbor in downtown Helsinki (as seen from the courtyard of the Russian Orthodox Church). The orange and white tents are the fruit, vegetable, fish and craft market that is there daily: 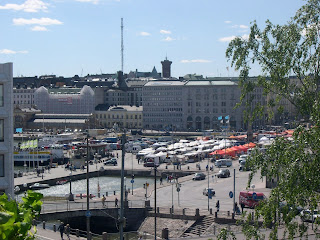 This is the harbor as well, this time with the Russian Orthodox Church in the background: 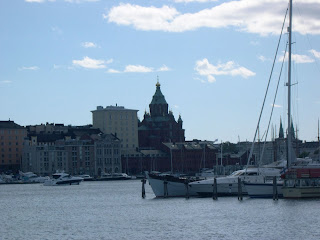 This is Suomenlinna, an old island fortress (now mostly dedicated to picnics and museums): 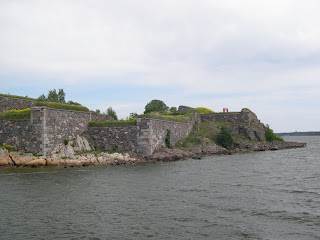 Doesn't this look like Hobbiton? This is also part of Suomenlinna. Phil and I thought the "houses" were probably air raid shelters. But they look so lovely and quaint! 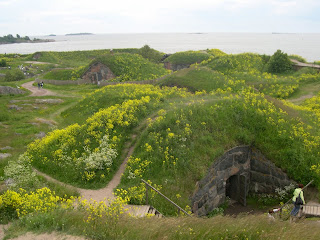 Phil peeking out of a Hobbit's home (I mean, air raid shelter...): 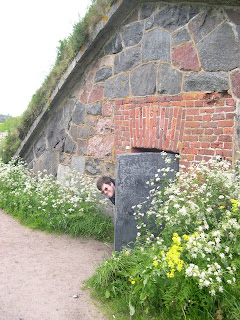 Helsinki has a first-rate zoo with lots of unique animals. It's also on an island and beautiful to walk around. But I think my favorite part was the peacocks roaming the grounds and begging at the outdoor cafes: 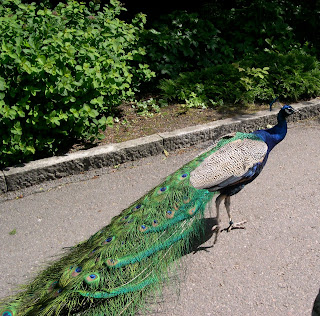 Someday I must own my own island with peacocks...

But first I've got to finish the book!
Posted by Anne M Leone at 2:00 AM