A break on the beach

Sorry for the blogging hiatus. I was on vacation, and anticipated limited internet-time, but have been told never to say on a blog that I'm away. Because obviously someone could read the post, track down my house, and steal all of my worldly possessions (which isn't much, but does involve my laptop). Not that I really think this would happen, but if it did, it'd stink.

Phil was at the International Congress of Vertebrate Morphology, and as it was in Punta Del Este, Uruguay, and I've never been to South America, I tagged along.*

As you see, Punta is right along the coast, about two hours east of Montevideo, the capital of Uruguay. Nothing is in the center of Uruguay, apparently, except farms.

Here's the view from our 8th floor hotel window. Yes, that is sea on both the east and the west of us: 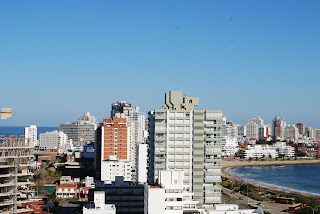 It felt so nice to be by the sea, smell the salt air, watch the waves. And the FOOD. I anticipated steak, and wasn't wrong. It was HUGE, juicy, and extremely inexpensive. But when I wasn't eating steak, I was eating fresh seafood. South Americans don't seem to believe in fruit and veg, though. Towards the end of the week, I was happily eating every scrap of green garnish on my plates.

Here's another view from the window at sunset: 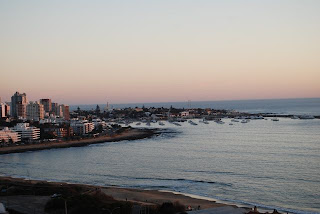 Lovely, huh? The downside? Well, it's winter in Uruguay. I was fine most days in a long-sleeved shirt, sweater and jacket, but when the wind blew, it REALLY blew. Here's our balcony on one of the not so nice days: 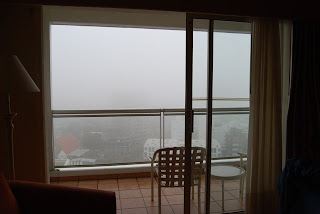 Also, Punta del Este is a huge resort town (as you probably guessed from the above pictures). In December and January, the rich flock there. In July, well, everything's closed. One day it got up to 60 and miraculously all sorts of businesses and tourist offices opened. Otherwise, it was pretty desolate. I took a day trip to Montevideo, and a boat ride out to Los Lobos, a sea lion island sanctuary. Otherwise, I read, enjoyed the sea, the surfers, the wild life, and even worked a bit on the novel. No complaints--it was a lovely break!

Oh, yes, the sea lions? There're a few in the harbor. They wait for the fishermen to gut their fish, then beg just like dogs. I could watch them for hours (and I have hundreds of pictures to prove it). Here's one, just for a taste: 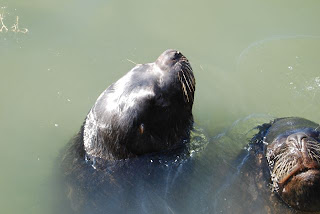 Here's a sea lion sleeping on the harbor. I hope he was just having a snooze in the sun and not ill: 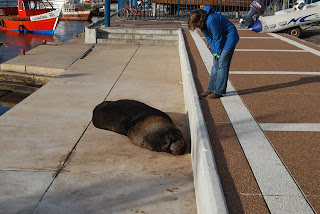 The island of Los Lobos is home to thousands of sea lions, and apparently even the rare elephant seals (yes, all of those blobs are sea lions). I didn't get as many pictures of this because as someone who gets motion stick in a car, I don't handle boats well, especially when they're dealing with waves: 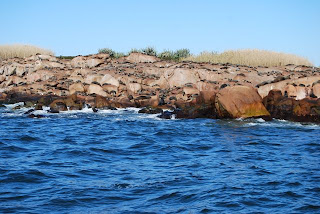 Oh, and penguins! You'll have to trust me on this, because this is my best picture, with full zoom, but if one watched closely, you could see penguins riding the waves: 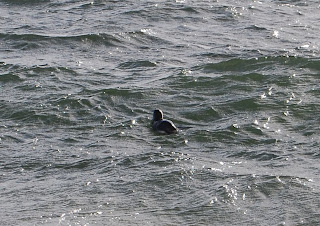 You may have seen pictures of this hand sculpture before, on the beach at Punta: 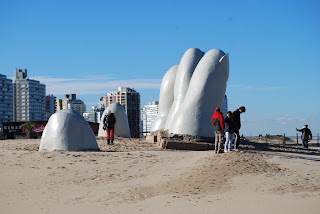 Happy to be back (especially after a return trip that lasted about 36 hours and involved a school group of 100+ middle schoolers traveling to London). I've stocked my fridge full of fruit and vegetables and am looking forward to getting back to some serious writing.

Hope you're enjoying your summers!

*I have to be honest; as a teenager I never fantasized about marrying a scientist. I was WRONG. I've traveled the world because of Phil's work. Young people, take note!
Posted by Anne M Leone at 9:50 PM