More highlights from the Bath Fest of Kids Lit

This past weekend I had the great privilege of helping out at the Bath Festival of Children's Literature again (last week's post is here). A few highlights:

Saturday was Zombies vs. Vampires with Charlie Higson and Nick Lake. As each audience member arrived, they were were given a red card and a green card for voting at the end. It set up a great format for a talk, as Charlie hawked his love for zombies, and Nick his fascination with vampires (though as he pointed out, really they're both undead creatures). It also gave the authors an opportunity to talk about their inspirations, research, favorite characters, and a few personal tidbits. Charlie Higson talked about not knowing how scary was too scary for children's horror. So as he was working on the book, each night he would read another chapter to his then ten-year-old son. The kid remained unmoved; "that was nice," *shrug*, "I guess it's scary..." Finally Charlie was awoken in the middle of the night by his son pounding on his door, tears streaming down his face. Charlie thought to himself, "Yes! I did it!" My other favorite comment from Charlie Higson was that boys (the majority of the audience) tend to favor zombies over vampires because teenage boys basically are zombies. And indeed, zombies did win in the end, though vampires put up a good show.

Sunday I sat in on Maggie Stiefvater and Jennifer Lynn Barnes' event. They each did a reading and a brief talk before they answered questions together at the end. Like Zombies vs. Vampires, I enjoyed the talk most when they were in conversation with each other (while they both have books about werewolves, they seem to be quite different types of authors). Jennifer Lynn Barnes has studied science (her research on a chimp reserve influenced her to write about a girl growing up with wolves) and has a very analytical mind. Maggie was more jokey and her speech was very stream-of-consciousness. Perhaps I enjoy the conversation format because it seems more natural and unscripted. Both authors were fascinating, and very honest about their experiences. Someone from the audience asked about their thoughts on Stephenie Meyer and Maggie said SHIVER has been published in 32 different countries. While she liked to think it was because her writing was brilliant, she knew it was because werewolves are an easy, reliable sell right now thanks to Stephenie Meyer. Maggie has been blogging about her trip here.

One of the best presentations of the weekend goes to Chris Bradford, author of the Young Samurai series. He was dressed in head to toe black, with only a slit for his eyes, and a samurai sword which he clearly knew how to use. I didn't get to see his presentation, but the children (and adults!) seemed mighty impressed (and perhaps a little afraid NOT to buy his book!).

I also helped out with Meet Horrid Henry, which involved a big plush Henry, as well as an amazing storyteller. The children were quite young and wiggly, but the second he started reading, they were riveted. *I* was riveted. He did all the voices and sound effects.

Afterwards I only got to see a small portion of John Fardell's talk. He made rough illustrations for many of the children in the audience. Talk about a great prize to take home! 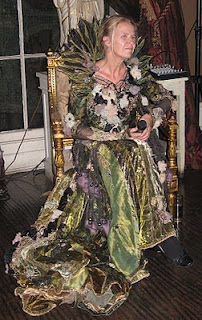 The other best presentation of the weekend has to go to Cornelia Funke. The audience was over 250 and Cornelia didn't disappoint. She wore the witch's dress, straight out of her novel RECKLESS. I borrowed the image here from Anita Loughrey's blog. Anita was at Cornelia's launch party in London and talks in detail about the dress in her post. Honestly, after seeing numerous authors in jeans and a T-shirt, it was nice to see someone really dress up. Though I did feel I was prepping the stage for a rock star. Cornelia Funke was a fascinating speaker; she talked a lot about her fascination with fairy tales, stories, and magic, as well as her writing process.

It was a great weekend (and a great festival). Earlier this week, Andy Stanton tweeted me to thank me for my blog post about his talk. I bumped into Marcus Sedgwick yesterday and he said hello (I'm afraid I was dumbfounded. I couldn't imagine Marcus would remember me from being Artist in Residence at Bath Spa University. But truly, he is that kind of person). As I was leaving, some of the staff told me to help myself to a couple of the books from the green room bookshelf. It was pretty picked over already, but I managed to take home a copy of Marcus Sedgwick's THE RAVEN MYSTERIES, HORRID HENRY ROCKS, a YOUNG SAMURAI book, and ONCE by Morris Gleitzman. I came home full of stories and with a stack of books, and felt a bit like a rock star myself.
Posted by Anne M Leone at 2:08 AM