Truly the land of stories

I went to Dublin to stay with a friend last weekend to celebrate finishing our MA! And as promised, here's pictures!

Of course, being two graduates of an MA in writing, the first place we went was Trinity College Library (well, this was more about avoiding crowds, but still...). The Book of Kells was incredible to see in person, but for me the highlight had to be the library's Long Room: 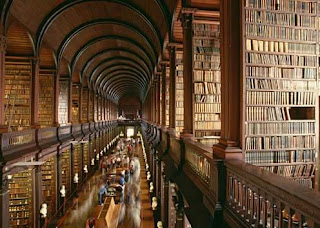 So many beautiful, old books, with moving ladders to reach them. And you could smell the old book smell from a room away. It was like being in a real life cemetery of lost books.

I saw a lot more of the city, and crammed in much of Irish history in a weekend. This is the infamous Kilmainham Jail, where the British executed the leaders of the 1916 Easter Rising. Also used as a set for numerous movies, which is why I think it looked rather familiar: 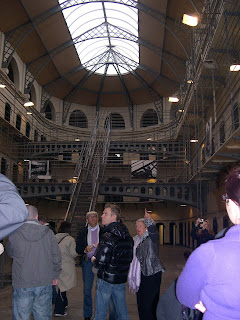 We spent Saturday north of Dublin on a tour of mostly ancient Irish history. We visited Monasterboice, a Christian settlement dating back to the late 5th century. It's home to the largest and most well preserved Celtic crosses in Ireland. My friend recognized one of the crosses from a school textbook, but never knew where it was! 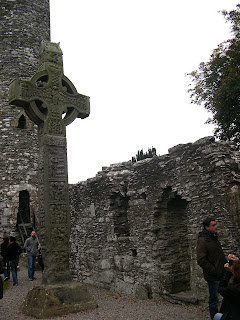 We visited the Hill of Tara, the traditional and mythological home of Ireland's kings. This is the Stone of Destiny. Tradition has it that if you're meant to be king and you touch the stone, it will scream with joy: 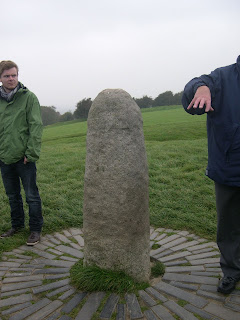 The absolute highlight of the weekend was visiting Newgrange. It's a mound, covering an acre of land. Here's an overhead shot so you can get the idea: 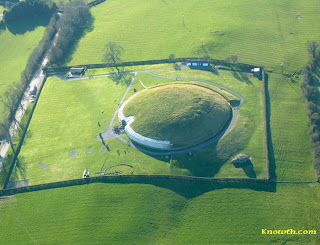 Inside is a stone hallway which leads to a large room with a domed roof, all human-made with slabs of stone. It's called a Megalithic Passage Tomb, and the one at Newgrange dates back to 3200 BC. And we got to go inside! But we couldn't take pictures, unfortunately. This is the best one I could find. Notice the circular art on the left stone. 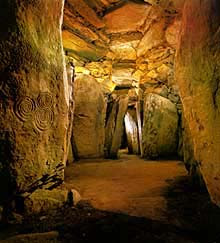 Definitely one of the most incredible places I have ever been in my life. And I never even heard of it until this past weekend! There were carvings everywhere I looked, alcoves where human remains had been found, and a light box traveling parallel to the entryway, so on the winter solstice, the room is flooded with light.

Here's the entryway, with a stone with carvings similar to the ones inside. You can see the light box above the doorway, too. 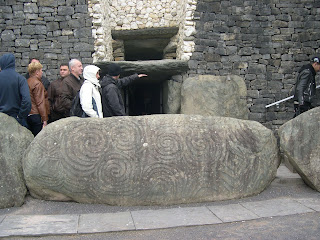 Here's a stone with carvings at the back of the mound: 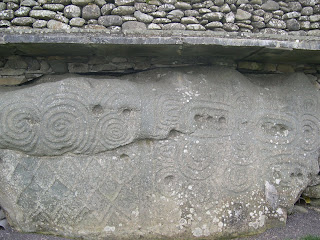 My friend lives right near the water, so wherever we went during the day, in the evening we got to go back to the sea. This is from the pier at Dun Laoghaire: 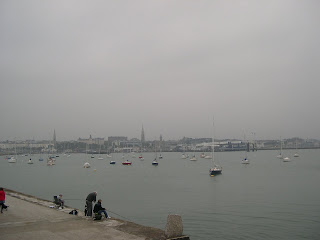 Everywhere we went, it seemed there was a story, whether about history, or myth, or dating so far back that no one is sure which. What an amazing place to be a writer.
Posted by Anne M Leone at 2:00 AM