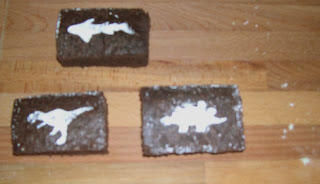 Yes, those are T-Rex, Stegosaurus, and shark brownies. What can I say? I'm married to paleontologist. We had a lot of fellow scientists over for Thanksgiving. I thought the brownies were particularly impressive.

Thanks to everyone for your Thanksgiving well wishes. The celebration was fantastic. We had around 25 people squeezed into our apartment, and so much food... well, it really did feel like Thanksgiving. I just wish I had taken more pictures.

As always, our friends rose to the occasion food-wise. Most of them have never celebrated Thanksgiving before, but they bring food that is traditional to their own cultures and families. Along with my jambalaya, we had pumpkin soup, Japanese spicy pork, several plates full of french cheese (brought from Paris that morning!), and frumenty (a traditional Anglo Saxon dish!). We had rolls, cheese muffins, lentil spread, and a shredded carrot dish with walnuts and vinegar that tasted just like something I could imagine my grandmother making. Along with Phil's pumpkin pie, there was an Oreo cheesecake, tiramisu, the brownies, and so many other delicious, lovely things that I didn't even have room to sample!

Aside from eating all that (plus many leftovers!), and dealing with the joys and frustrations of the submission process (more on that next week), I actually have been getting some writing done.

My OctAnNoNaNoWriMowithNoGuilt-o pursuits are over, and officially didn't go so well. But unofficially I'm pretty pleased.

I worked on Project Demo for a few weeks, then gave up and switched to something else. However, for all my gusto and determination, I'm clearly a fickle writer. I got just as frustrated with the something else, and because I couldn't get Project Demo out of my head (and because all my writing friends love it), I switched back a week later.

But I now believe I'm into Project Demo for the long haul. At least, until I finish my rough draft. It could quite possibly be the shortest and roughest rough draft I've ever written. But as of this morning I'm over 16K and surprisingly pleased with it.

How did NaNo (or your other writing commitments) go for you this past month? Any crazy plans for the Christmas holidays (writing, food, or otherwise related)?

As for me, I'm in the holiday mood. I think I'll make some Christmas cookies this afternoon. Happy holidays!
Posted by Anne M Leone at 5:36 AM