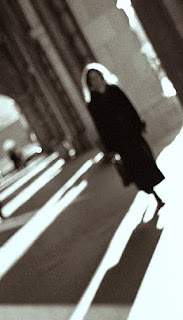 A classmate in my MA program once told me I was the only student with a central character who wasn't basically me. I believe he meant to compliment my originality, but at the time I thought, "If you only knew me better, you'd see so much of me in Project Sparkle."

His comment got me thinking, and the more I thought, the more I worried. I am not my main character. Project Sparkle is far from memoir. Yet I share an inner core with my character. If I were in her shoes, if I had nothing to lose, I imagine I'd make some of her same mistakes.

Is that poor writing? If I can never escape a specific handful of character traits, will I be destined to write the same book over and over? Imagine dozens of novels, each with dozens of Annes running around their pages.

At least I'm in good company. Author E M Forster once said, rather humbly: "I have only got down on to paper, really, three types of people: the person I think I am, the people who irritate me, and the people I'd like to be."

Perhaps that's what character creation is about. We draw on our hopes and fears, friends, our boss, nosy relatives, the stories around us. Of course we want to mix things up, throw in details that are decidedly not us (in my previous novel, my main character was a math whiz. Hah!). But at the end of the day, I am the creator of my novel. Its world is going to resemble me.

And while that world may be a limited creation, literature can also spawn an incredible universality. Forster may have been writing about himself, but how is it that his characters also speak to me? Good books are magic like that.

Do you ever worry that your characters are basically you? Do you try to change them?
Posted by Anne M Leone at 2:00 AM