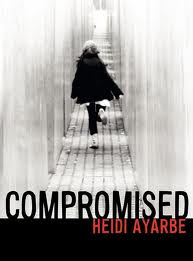 Monday I blogged about Pretty vs. Gritty books and authors. Today, I want to review COMPROMISED, one of the best gritty books I've read in a while.

Summary (Goodreads): "Maya's life has always been chaotic. Living with a con-man dad, she's spent half her life on the run. Whenever her father's schemes go wrong, Maya finds a scientific way to fix it. But when her dad ends up in prison and foster care fails, Maya grasps at her last possible hope of a home: a long-lost aunt, who may not even exist.

"So Maya formulates a plan, and with her wits, two unlikely allies, and twenty dollars in her pocket, she sets off in search of this aunt, navigating the unpredictable four hundred miles from Reno to Boise. Life on the streets, though, becomes a struggle for survival—those scientific laws Maya has relied on her whole life just don't apply."

I found it to be an honest portrayal of homelessness and life on the streets. Heidi clearly understands the dangers kids face. Her characters feel they can't turn to the police because of the violence they've encountered in their own homes and in the foster care system. However, their fear of the authorities leaves them entirely alone to cope with the cold, hunger, and violence. And they're children; they struggle to even read a map.

Since I've finished the book, I've actually been thinking a lot about the title COMPROMISED. It's a great, eye-catching, memorable title. But it also suits the book. While Heidi's novel is about a terrible, sad situation, there are no evil characters. Every character, even the minor ones, thinks they're doing the right thing, or at least the best thing, given the circumstances. Their lives are full of compromises. Maya's Dad surrenders her to the foster system, her friend, Nicole, shoplifts food and medicine.

The entire story is seen through the eyes of Maya, who is a useful window for readers into the world of homelessness. It's a completely new life to her, so she is as shocked and disturbed as the reader. However, she hides her emotions behind scientific facts, and is always formulating a plan. Her way of life is compromised by homelessness. She quickly discovers, despite her plans, there's nothing about her life that she can control.

So... a gritty story. But just as Monday we were talking about finding the balance between gritty and pretty, I think Heidi focuses on the second part of her title too, the idea of "promise". In the course of the book, Maya learns to open herself up to all different types of people and situations, illiteracy, Tourette's, transsexuals. And she ends up finding her own family and friends on the street.

So COMPROMISED is a gritty read, but it's also truthful. It's filled with memorable, realistic characters, and a backdrop of love, hope, and family, even in the midst of darkness. And it's a great read.

Disclosure: I received a signed copy of COMPROMISED from Doret at TheHappyNappyBookseller. Thank you Doret & Heidi!

You can read TheHappyNappyBookseller's interview with Heidi Ayarbe about COMPROMISED here.
Posted by Anne M Leone at 7:11 AM