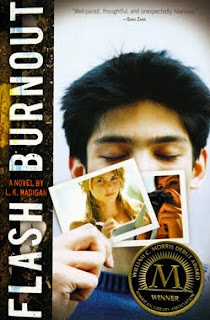 In Flash Burnout by L. K. Madigan, a photography teacher refers to two of his students as Pretty and Gritty. Pretty takes a lot of pictures of trees and flowers, Gritty does urban landscapes and homeless people.

I've been thinking a lot lately about the difference. Fellow writer / blogger Nick Cross has also written about this juxtaposition, calling it Catharsis vs. Escapism. Obviously the best books have both, but some artists are definitely more Pretty and others much more Gritty. Why? And how much choice to we have in the matter?

Because I tend to be an awfully gritty writer. I start writing a middle grade novel about pirates, and end up dealing with issues of slavery and rape.

Some writers deal with dark subject matter as a way to consider their own lives. That's what Nick Cross means when he talks about catharsis. But sometimes the opposite can be true. Author Meg Cabot has talked about how her difficult childhood with an alcoholic father prompted her light-hearted stories: "Romantic fiction was the only thing that helped me escape when my life was the worst it ever was (and the worst I hope it ever will be). And I vowed then that if I ever became a professional writer, I’d write books that I hoped would give readers like me a fun escape from whatever awful thing they were going through" (the whole post is incredibly thought-provoking, touching, and worth reading).

Thankfully, I had a safe childhood. So perhaps my gritty novels are the result of a fascination with darkness.

But I think, more so, I'm obsessed with truth. I don't like to read romances with flawless (and beautiful) characters whose lives end happily ever after. Or watch movies about inner-city children who beat the odds and never look back. As a former teacher, I know it doesn't happen like that. Instead, I've discussed oral sex with kids, bullying, sexual harassment, self-harming, abuse. Some of this with children as young as twelve. It happens. Unfortunately, it happens frequently. So to me it doesn't feel right to skate over these issues.

But at the same time, I miss escapist writing. One of these days I'd like to write a really fun book about pirates. I'll let you know how that goes.

In the meantime, on Wednesday I'll review of one of the best gritty books I've read recently, Heidi Ayarbe's Compromised.

Are you consistently Pretty or Gritty? Or do you somehow manage to balance both?
Posted by Anne M Leone at 5:30 AM