The Acropolis: Greece Pics I

Blogger finally got over its massive meltdown, and I finally got my blog back! Here's Friday's post, just a day late:

Are you ready for a plethora of Greece pictures? This should give me something to blog about for the next few days, at least!

Phil and I spent the first day of our trip exploring Athens' Acropolis, which is on a mountain plateau towering over the city. 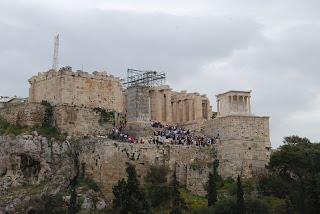 Above you can see the people swarming the entrance (called the Propylaea). Its ceiling used to be painted dark blue and covered with stars--how beautiful must that have been? The small temple on the right of the picture is the Temple of Athena Nike (erected in a hope for victory (nike) against the Spartans).

Of course, once you've climbed through the marble staircase of the Propylaea, the star of the show is the Parthenon: 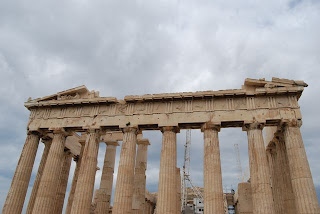 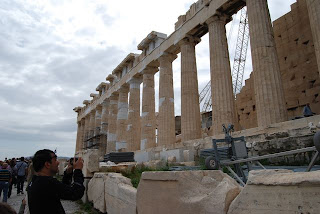 The Acropolis is also home to the Erechtheion, which has these lady pillars, the Caryatids. I've seen them in so many pictures, but how cool to actually SEE them (actually, these are replicas, but I saw the real ladies in the Acropolis Museum!). 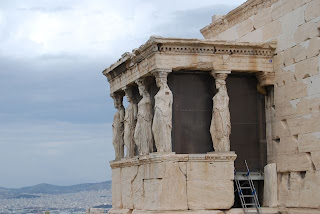 You see all the ladders, cranes, and scaffolding? At first I thought we were unlucky, but later learned the Acropolis is under an almost permanent conservation effort. And she needs the help--the caryatids lost more facial definition in the past fifty years (before they escaped to the museum) from acid rain, than they had since they were first built in 400 BC.

Speaking of things we learned... Greece really loves its animals. Lots of stray dogs and cats, but they seemed fairly well cared for, with kibble and water set out for them, and no one minding if they made themselves comfortable. 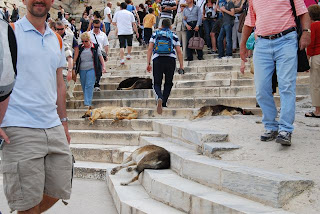 A kitty "helping" with stone transport: 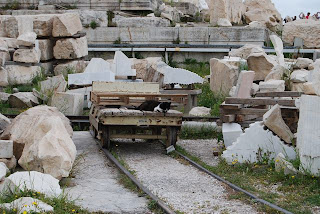 For me, one of the most amazing things about Athens was just how much was there, so well preserved, scattered throughout the city. On the edge of the Acropolis is this (slightly newer) theatre, the Odeon of Herodes Atticus, which is still used for performances today: 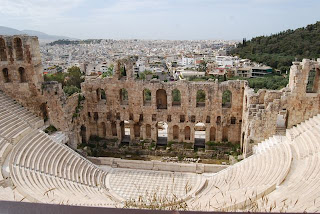 Below is Mars Hill, which the Apostle Paul (according to the Bible's Book of Acts) climbed up on to rail against the Athenians for their temple to an unknown god: 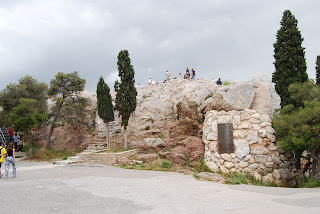 See? Athens has EVERYTHING. Too cool. I'll post some more next week.
Posted by Anne M Leone at 6:40 AM