The second day of our trip to Greece, Phil and I traveled to Delphi, about three hours northeast of Athens.

Our tour bus wound through the mountain switchbacks, taking us higher and higher. When the clouds parted, we could see the blue line of the sea sparkling in the distance. We barreled through this tiny mountainside village, Arachova, with winding streets, crumbling stairs, and picture-perfect houses. It was so pretty, Phil dubbed it "stupidly picturesque."

Then we arrived at Ancient Delphi and got off the bus. Ancient Delphi is built along the side of a mountain, so you have to climb up to see everything. There was enough time for us to get our tickets and to reach the first major ruin, Apollo's Temple. Then the heavens opened up. It poured.

Our guide insisted it would clear up in a minute, that it was very unusual weather for Greece. Then he said we shouldn't worry anyway, it was divine rain, a gift from the gods. It was good for us. A few minutes later we were completely soaked and most of the group insisted to be allowed back on the bus.

Thankfully, while all this was going on, Phil and I had been looking around. Not only had we paid a fair amount to spend the day in Delphi, we were looking at one of the most incredible places we had ever been. Besides, we were soaked anyway.

Unfortunately not many pictures. Other than a few spots of sunshine, it really was pouring.

Here's the amphitheater. The columns (behind the tree) and other ruins directly below it are the remains of the Temple of Apollo. It was inside this Temple that the Oracle of Delphi practiced. Can you imagine a more perfect location for an Oracle? 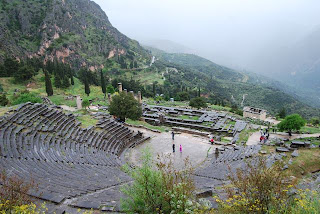 This gutter ran alongside several of the buildings, down the side of the mountain. And the coolest part? Because of the rain, we could actually see it still working! 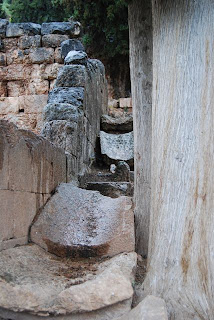 At the top of the path, was the stadium, where track and field events were held. Again, what a location! 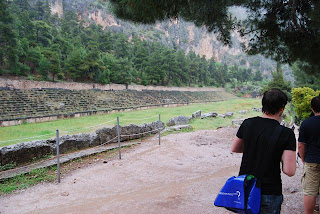 Why not step a little closer to take this picture? Phil was standing under a tree trying not to soak his camera!

And here's me, soaked, but happy: 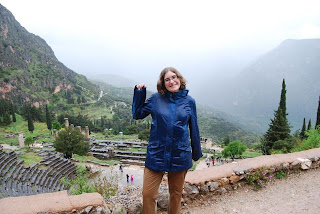 When we returned to the bus, Phil and I were shocked to discover most of the rest of our tour had hardly seen Delphi. They asked us if it was worth it. I didn't want to lie, but... yeah, it was. Other than being sopping wet and my socks smelling like mold and getting really bad motion sickness on the way down the mountain, it honestly was one of the best days of the trip!

Luckily the sun came out for a bit later in the day. We had lunch in modern Delphi, and finally got to see more of a view. The sea is in the distance. The green patch that almost looks like a sea is an orchard of olive trees. The olive tree was first given to the Greeks by Athena, and is considered her most perfect gift. 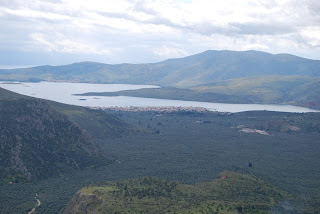 More pictures next week, and for Friday I have a little surprise to show you!
Posted by Anne M Leone at 2:00 AM