This is my final post on the Bath Kids Lit Fest (see Day 1 here and Day 2 here). Writing these posts has almost been like volunteering and attending the events: exhausting and time-consuming, yet fascinating and inspirational. I'm glad that not only have I been able to capture many of my memories, but that I've been able to share them with you. 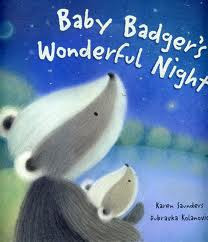 A week ago Thursday was Writing for Children and Teenagers, the annual event hosted by the the MA in Writing for Young People at Bath Spa University. There were brief readings and discussion from four authors, Bath Spa's Writer in Residence, Marcus Sedgwick (his most recent book is Midwinterblood), Gill Lewis (Sky Hawk), Sam Gayton (The Snow Merchant), and Karen Saunders (Baby Badger's Wonderful Night). The course director (and my amazing tutor) Julia Green moderated.
It was a fascinating juxtaposition of stories and opinions, though like many of the multiple-author events, I wished I could have heard more from some of the authors. Marcus Sedgwick shared about being behind deadline, scrapping his work in progress, and starting the novel that became Midwinterblood after being inspired by a painting. Midwinterblood has a unique, risky structure (14 narrators, 7 time periods), so Marcus talked about breaking publishers' rules. He also argued that children's stories can have adult narrators. I'm not sure I agree, but it's interesting to ponder.
Sam Gayton shared about his writing process and the development of The Snow Merchant. He compared the writing itself to snow falling, slowly but steadily building up. Such a beautiful (and true!) image.
Gill Lewis talked about how her childhood fascination with animals, and her adult career as a vet, inspired her novel Sky Hawk. She also shared her amazing publication journey. She got an agent in the space of a week or so, and Oxford University Press offered her a contract in less than 24-hours.
I was so grateful for Karen Saunders contrasting story: her novel was almost picked up by two publishers, but ultimately turned down. Then her agent shopped a picture book manuscript she had written on the course. That was accepted for publication, but her publisher asked her to cut half of it and change the title and character names. She put her foot down when they asked if she could use an animal other than badgers. But now, six years since the completion of her MA, her picture book is out and she's at work on the next. And it's a lovely story, with gorgeous illustrations.
I've been thankful for the writers this week who have dared to say how difficult writing and publication can be. In the past, I've heard authors glibly tell stories, like that they wrote their book overnight, and I think those sorts of expectations can set writers up for disappointment.
Jacqueline Wilson was another author this week who was honest about her struggles to become a published author. And what an event that was!
For those of you (Americans!) who don't know who Jacqueline Wilson is, she's a rock star over here, an institution. I blogged about her here.
The Kids Lit Fest set a record for attendance at their Saturday Jacqueline Wilson event: 1426 people. And I managed the line! It circled almost completely around the block, and was filled with girls and their mothers (and a few lovely sons and fathers) clutching battered copies of Jacqueline Wilson books to their chests. And all on the hottest October day in Bath ever.
We packed into the Forum (a giant auditorium / church). The stage was enormous, with only a single chair and table for Jacqueline. It looked ridiculous, but when Jacqueline came out, somehow her presence managed to easily fill the space. She was charming and funny. She shared her story of becoming an author, living in a boarding house's linen closet while she worked for a children's magazine. For a while she wrote the horoscopes, and she admitted she knew nothing about stars or signs, so she made it all up. But she filled her own horoscope with all sorts of dreams of fame. Quite amazing how much has come true for her.
But she encouraged writers to be true to themselves. She got into the business as a teenager, when she saw a magazine's call for teen writers. They were looking for beauty and fashion tips and romance stories. Instead she wrote a story about being the awkward girl at the dance, pretending to look like she was having fun, taking long trips to the bathroom, and afterwards smiling and telling her family what a nice time she had before she cried in her room. The magazine bought it, and that was her first publication credit. 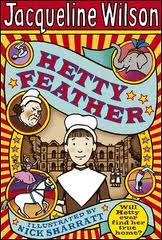 Jacqueline also shared her more recent history, including her heart attack that required three months of recuperation. It resulted in her first historical fiction novel, Hetty Feather, a book that she had desperately wanted to write, but could never find the time to research. Funny how life isn't always up to us. But Hetty Feather has become her favorite character from all her books.
One thing I take away from the Fest every year is how different all the good talks are. Some authors show movies, others bring artifacts, some run around and scream, some (Jacqueline Wilson) sit on a single chair on a giant stage and yet fill the whole room. I think the best talks (like the best books) come from the authors who just act like themselves. After all, that's what we're there to see, anyway.
Posted by Anne M Leone at 2:00 AM