Welcome back! Apologies for my absence. I just returned from a long trip to the US to visit family for the holidays. Since then I've been coping with my jet-lag by eating Christmas candy and catching up on all the great British TV I missed while I was gone. 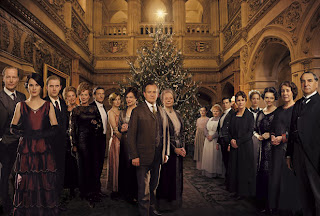 Seriously. The Brits have a tradition of showing their best programming around Christmas. Kind of like how the US has the best commercials during the Super Bowl. Or something.

So when I got home Monday evening, a bit sick, hungry, and exhausted, I got myself some lentil soup and lamb meatballs from the Middle Eastern deli down the street, and curled up on the couch to eat dinner and watch the two hour Downton Abbey Christmas special. Yay! It was everything I hoped it would be. I've been a bit disappointed in season 2, but this was nearly perfect in every way. If you haven't seen Downton Abbey (season 2 premiered in the US Sunday night, and currently the episodes from Season 1 can be seen online) you're really missing out.

Still jet-lagged and irritable Tuesday, I sat down and watched the Christmas special again. 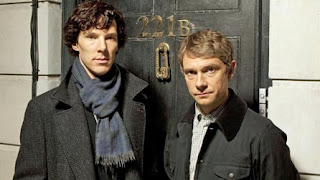 Then that evening, feeling a bit more myself after grocery shopping and cooking dinner, I settled down to catch up with Sherlock, a modernized series about Sherlock Holmes. I quite enjoyed season 1 (I'm a huge Martin Freeman fan and can't WAIT to see him in The Hobbit), and within minutes was equally absorbed in the first episode of season 2. Until I wasn't.

It was a good episode. I watched the whole thing. I laughed a few times. I was surprised. But at the end, I had a sick feeling in my mouth. So I searched for #sherlock on Twitter. And I was so grateful to discover I wasn't alone. The Guardian published an article pointing out the episode's sexism. And there were several blog posts on the topic as well (here's one).

Except this was just the first episode of the series. Another one has already come out, and the last one will premiere Sunday. Are the other episodes as bad? Probably not. They probably don't have any females to speak of. The first season didn't. Would I enjoy them? Probably. Will I watch them?

I thought about it all Tuesday evening. Finally I decided I didn't really love Sherlock. The acting was great, the characters and set-up are totally fun. But the plots sometimes don't hold together. I'm not emotionally entangled in the show (as I clearly am with Downton Abbey). So if I have to give it up, I could. And I think I will. Because even though I know I'm a very small voice among thousands, I don't want to support Sherlock anymore.

Of course, art is never perfect. I believe in criticism, in discussion, in subjectivity. And we all have our biases. Downton Abbey has had a few sexist, cringe-worthy moments, too (a great review from The Book Smugglers, see number 3). But it hasn't weighed down a whole episode for me. Yet.

I find myself frequently drawing these imaginary lines in the sand. When is something bad enough that I can't support it any longer? It's easy when it's something I don't care for. But what about when it's something I love? What about Apple and their poor factory conditions (This American Life recently provided a moving and thought-provoking report on this)? I want to believe Apple's PR that they're doing something about it. What about all the power and money tied up in college sports? I just hope a scandal never comes out about my team.

How do we deal with finding ugly things in what we most enjoy?

For me, at least when it comes to stories, the answer is to create better art. Sure, I have plenty of my own biases. But at least, every day, I can absorb myself in a world I believe in and think is worth sharing.

Sorry for the downer of an opener to 2012. I promise to come back next week with more pep and excitement. But the TV, it must be talked about! In the meantime, happy New Year!
Posted by Anne M Leone at 2:00 AM