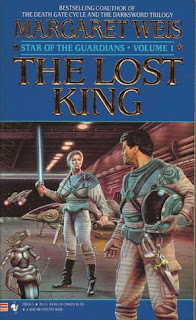 I was a voracious reader as a child, and remember discovering so many incredible books: Tamora Pierce's Alanna: The First Adventure, Roald Dahl's Matilda, Louise Fitzhugh's Harriet the Spy, Orson Scott Card's Ender's Game. But looking back at all the books I consumed and returned to time and time again, one book sticks out above all the others: The Lost King by Margaret Weis, and the following two books in the series The Star of the Guardians.*

Not familiar with it? I'm always surprised how many people aren't. The author, Margaret Weis, is much more famous for her partnership with Tracy Hickman, and their creation of D&D and the first Dragonlance books. But she's always said her favorite of her series was The Star of the Guardians.

A space opera (part sci-fi, part fantasy) The Lost King begins 17 years after the galactic rebellion, which resulted in the murder of the king and queen and the dissolution of the monarchy. A corrupt general is amassing an army, planning to use his might to rule the galaxy himself. But unbeknownst to almost everyone, a small group of monarchists are harboring the lost king, a boy who was born 17 years ago on the night of the rebellion.

The Star of the Guardians has everything: a ruthless warlord, hungry for power, yet secretly yearning for the woman he has always loved; the greatest sword fighter in the galaxy, whose dreams and duty conflict with the only person who could ever make her happy; a young boy who is ignorant of his roots; a working class cargo driver who stumbles into protecting the lost king;  a snarky ship computer who wins arguments by disabling the heat and light in his spaceship; a multitude of aliens, planets, and spaceships...

I warn you, I could go on and on! Star of the Guardians is so rich in humor, love, drama, and adventure. Plus, it was one of the first novels I ever encountered starring a woman who is as tough and strong (if not more so) as any of her male counterparts.

And I'm not alone in loving it. Reading the reviews of it on Goodreads, so many others discovered this novel in middle school / high school and have treasured it since. A few complain that it's totally derivative of Star Wars, which is probably true, but who doesn't love Star Wars? And Star of the Guardians has so many other, wonderful things, uniquely its own.

I've read it so many times, my copy of The Lost King is filled with dog eared pages and the cover is secured in place with tape. I would hug it right now if it wasn't sitting in storage in Chicago!

Any other Star of the Guardians fans out there? What's your favorite childhood book?

*Note: The Star of the Guardians started life as a trilogy, but several years afterwards Weis wrote another novel in the series. However, I pretend this fourth novel, Ghost Legion, does not exist.
Posted by Anne M Leone at 2:00 AM