Where are the books for 13-year-olds? 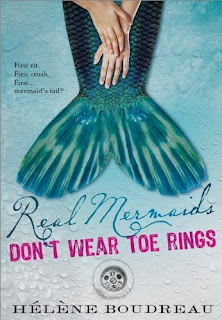 Hélène Boudreau's Real Mermaids Don't Wear Toe Rings opens with a girl turning into a mermaid--it's the culmination of a really terrible day. Jade takes the readers back through everything: trying on swimsuits with her best friend, desperately trying to find one that hides her muffin top. Then she gets her first period--yes, ruining the store's swimsuit. She discovers she doesn't have any money on her, so she has to call her dad to come to the pharmacy with her and buy feminine products. And while her dad is price comparing tampons on his Blackberry, of course her crush appears. I couldn't stop laughing. It brought back so many embarrassing pre-teen memories!

But once I wiped the tears of laughter away, and promptly bought the whole book for my Nook, it struck me: what's the last book I read about a girl getting her period?

I couldn't think of anything except Judy Blume's Are You There God? It's Me, Margaret. And yeah, that was published in 1970.

I'm sure there are others. I've probably read a few and forgotten them. But I think it's awfully striking that I read a hundred plus books a year, most of them for children, and I can't think of a single other title.

I suspect much of the blame for this rests with the publishing industry. For those of you who don't know, the American children's book market has two categories that stretch this age range: middle grade, which is books for 9-12 year-olds, and young adult, which is typically defined as 12 and up. Since children usually read about kids slightly older than themselves, kids in upper elementary school are reading middle grade novels (think Percy Jackson, the early Harry Potter books, books about 10, 11, and 12 year-olds). Kids in middle school are frequently already reading young adult books (where the protagonist is at least 15). What's left out? No one's reading books about 13 and 14 year-olds.

I know that sounds like a really minor complaint, but a lot happens when girls are between the ages of 12 and 14. I was lucky enough to grow up with authors like Judy Blume and Paula Danziger, and I read books about girls getting bullied because they were fat, or waiting to see how large their breasts would be. I don't think today's generation has anything like that--even Boudreau's book is mostly about a girl becoming a mermaid.

It's strange. The publishing industry prides itself on being progressive, open to edgy content, swearing, sex. But where's the frank, non-metaphorical discussions about what it means to be 13? And even if such a book did it exist, would it find a home in the market? I've been mulling these questions over lately. Maybe it's not just the publishing industry that's to blame. Maybe after all this time we're still hesitant to talk about the way the female body works. I know I don't have anything on my hard drive resembling these types of books. I'm more of a mermaid author myself. But my subconscious won't let this go. Or maybe it's that I used to be a 7th grade teacher, and I think about my former students, and all their worries and fears. Or my own 7th grade self. Maybe it's my conscience that won't let this go.

I subbed in a 5th grade classroom yesterday. Do you want to know what all the kids were reading? Suzanne Collins' Hunger Games and Stephenie Meyer's Twilight. Really. Doesn't that make you feel a little queasy inside?

Have you noticed this dearth of books? What do you think the cause might be? Have you written one yourself?
Posted by Anne M Leone at 6:00 AM