Inspired by John Truby's The Anatomy of Story (such a good craft book), last year I created a "wish list" of everything I'm passionately interested in: characters, plots, settings, genres, tropes, etc. For instance, ever since I discovered the Pirates of the Caribbean ride at Disney Land, I've been hooked on pirates. For some reason almost all of my novels involve class distinctions. And I love rebellion. The idea behind the wish list was to use it to develop story ideas, but to also test the staying-power of the ideas I come up with. For example, a pirate who rebels from his ship to court a wealthy landowner's daughter? SOLD! 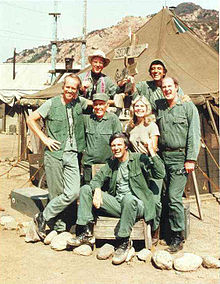 Lately, I've added another item to my wish list: ensemble casts. I grew up watching MASH, and struggle to imagine any TV show topping it in my heart. Over time I learned to love each character, discovered what moved them, what hurt them, and how it affected their relationship with the rest of the characters, their patients, the army, and the war itself. It's that complex web of relationships and plot that I adore. My current obsession is Downton Abbey, which has that same ensemble cast (and incidentally, is ripe with class issues).

Ensemble casts suit TV, as the viewer can return each week for another episode, and a series can last for years. But is it possible to create that ensemble cast feeling in a book? Harry Potter comes close, as does one of my favorites from 2012, Michelle Cooper's Montmaray series. Of course, Charles Dickens was the master of the ensemble cast. Though many Victorian classics have an omniscient narrator with numerous characters.

But I'm struggling to come up with more modern examples, especially within children's literature (Sisterhood of the Traveling Pants? The Babysitters Club?). It's harder to do ensemble casts in the finite realms of a  book, especially with the prevailing reliance on first person narrators. Maybe, as my wish list suggests, I need to write my own.

Do you find yourself sucked into ensemble stories too? What are some of your favorites? Can you think of any modern examples?
Posted by Anne M Leone at 6:00 AM