This was supposed to be a bragging post... except it didn't work out that way. 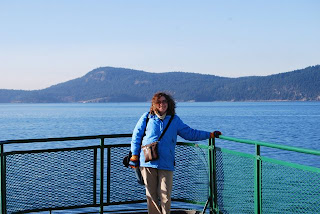 In mid-January, I traveled with my husband to Friday Harbor, a town on the island of San Juan, off the coast of Washington State, right on the edge of the Canadian border. Originally I hadn't intended to go. Phil would be doing research there (Friday Harbor Laboratories is part of the University of Washington), and two weeks on the ocean in January by myself didn't sound overly appealing. But Phil's work colleagues repeatedly told me how beautiful Friday Harbor is. And about that time, I realized I'd be neck-deep in Project Fun revisions. As a friend reminded me, it was a win-win situation. If the weather was good, I'd get to enjoy some beautiful hikes and scenic drives. And if the weather was bad, I'd get lots of writing done. And I've always wanted to go on a writing retreat, to get away from everything except my thoughts, and to have unlimited time to put pen to paper. 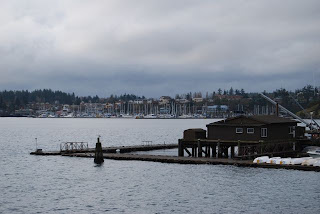 The view from our back porch: 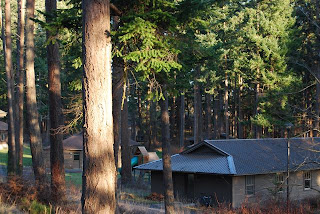 I got tons of writing done, including several new scenes. I was offered a space in the Friday Harbor Labs' library (pictured below), with a view over the ocean and a desk to call my own. 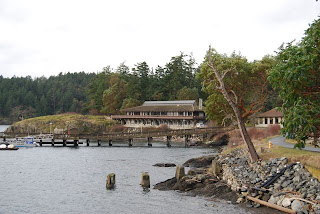 And because it was January on a touristy island, I hardly saw a soul. I went on long, meandering walks, spotted vultures and eagles. 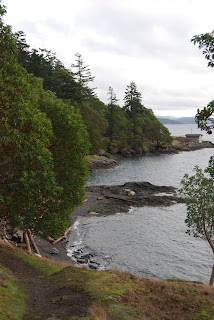 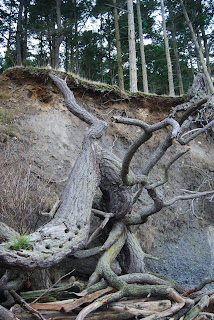 Oh, and the deer! I've never seen anything like it. They were totally unafraid of humans. I could stand feet away, and they wouldn't even look up. It was like someone had turned me into Snow White when I wasn't paying attention! 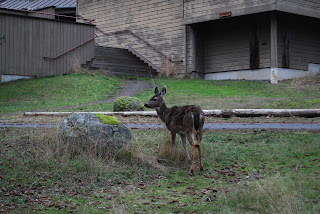 Friday Harbor is definitely beautiful, and teeming with wildlife (in the summer you can see orcas off the coast!). But I think what I loved most about it was the weird juxtaposition between natural paradise and science labs. Add to that the fact that I hardly saw anyone, even at the labs, and it became a little creepy. In a good, writing inspiration way! 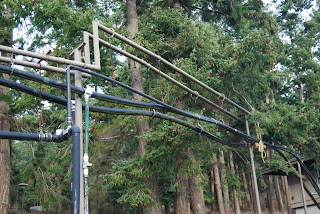 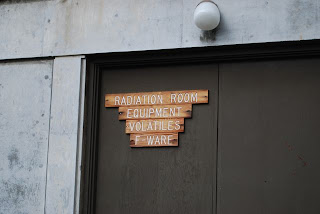 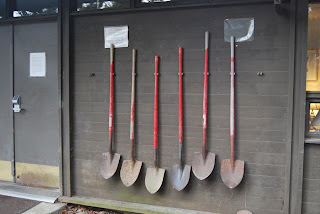 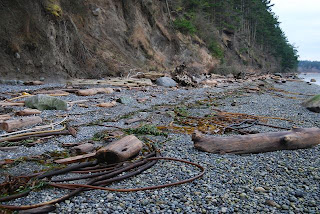 But after five days or so of being on my lonesome and working my butt off, I was exhausted.  Who knew a writing retreat could be so tiring?! Unfortunately, around that same time, Phil realized he needed a lot more time to accomplish his research, so there were a lot of stressed days and late nights. Maybe I would've enjoyed my retreat more if I hadn't had to cook dinner every night. Or better yet, if there had been other writers to share dinner, along with stories and a bottle of wine. Or if I had given myself more time to play, and to develop new stories, rather than forcing myself to finish Project Fun. But maybe retreats just aren't for me.

I'm not really complaining. At the end of the two weeks, I had accomplished more than I ever imagined was possible, and I was nearly done revising Project Fun. And I did have some incredible opportunities. The other scientists there were wonderfully supportive--I think they loved the idea of someone doing something creative and not-science. And I should say, we did have a few dinners together, so I wasn't ALWAYS on my lonesome! One of the scientists took me on a tour of the lab's electron microscope, and we studied dead flies from the windowsill: every single sticky hair on their legs, and each bead of their eyes. Totally gross, but totally fascinating, too, especially with someone who could explain it all. Another scientist is a pilot, and offered to take me on a spin around the island. I'm one of those lucky people who actually loves flying (at least, the being up in the air part, not the security or lines or stress part). And I've never been in such a small plane! It was shockingly smooth, and a beautifully clear day. We saw all the bits of the island I had hiked, Mount Baker in the distance, the sun illuminating the clouds. And bald eagles! Two buzzed us, flying right over the plane, like they wanted to make sure we saw them in all their glory. 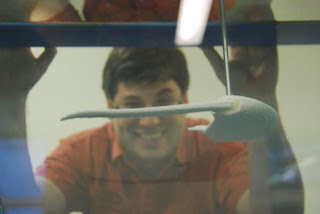 And no, I don't have any pictures of that because my husband was busy taking pictures of shrimp appendages in a wave tank. Not that I'm bitter or anything. No, really. I imagine nothing could top incredible images I've stored away in my mind.

So it was a good trip. But I was so ready to come home.

Now I just need to decide, when he goes back, if I'll come along a second time...

I should add, for any of you drooling over these pictures of Friday Harbor, they have an actual writing retreat there, called the Whiteley Center. While you pay for room and board (though the cafeteria would be open if you didn't come in the complete off-season!), you're given space to work, and the rooms are gorgeously appointed, with long wood desks, fireplaces, art, and the best views on campus. And you can bring friends, so a whole critique group could go. Now THAT sounds more like my style!

Have you ever been on a writing retreat? What was your experience?

*All pictures taken by me, except the first, which was taken by Phil.
Posted by Anne M Leone at 6:00 AM