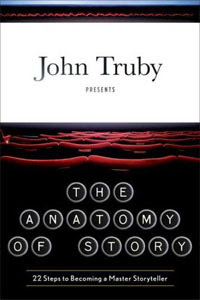 When I start a new project, I'm like a kid in a candy shop. The possibilities are boundless, sugar-filled, and in every color imaginable. My problem is forcing my brain to concentrate and to reign all my options into something resembling a coherent plan. That's where Truby comes in.

I discovered John Truby's The Anatomy of Story a few years back. I blogged about it then, mostly complimentary, but I hadn't yet used his methods to create a story from the ground-up.

I'm ashamed to admit I haven't written about Truby since. But I now keep The Anatomy of Story on a bookshelf next to my printer, within hand's reach of my writing desk. Any time I consider a new idea, I start Truby's book over again.

I think part of the reason Truby's process works so well for me is because it's so organic. Truby begins by challenging a writer to list all the possibilities a story provides. Nothing's too big or too ridiculous to be included. The second step is to list all the challenges inherent in an idea: genre limitations, plausibility, a writer's own fears, making sure to avoid cliches or stereotypes.

Then, with those two lists, Truby helps me corral an idea into a shape. I identify the most interesting character, what her goal is, how that goal might change her, and what her climactic moral choice will be.

Those sound like big questions (and they are), but they're also very basic. Do I know the setting yet? Only as a grainy image. Do I know how the character will achieve her goal? No idea. The goal itself can be as fuzzy and indeterminate as escaping the bad guy. And of course I can always change it later. But as I puzzle through these initial questions, a skeleton story emerges. From there I can move onto key points in the story, character development, themes, setting, and plot (for more about that process, see my initial Truby post).

Working through The Anatomy of Story with Project Fun, from initial idea to solid outline, took a month. Was it time consuming? Yes. Did I ever change my outline as I started writing that first draft? Sure. But even from the very beginning of writing that draft, because of all my previous considerations, I was (fairly!) confident my story could make a proper novel.

I'm currently winding down edits for Project Fun, getting it squeaky clean and ready to send out into the world. So this morning, I gave myself some time to consider my next project (as yet unnamed!). I took Truby off the shelf and started all over again with chapter 1. I can't imagine doing it any differently.

How do you begin again?
Posted by Anne M Leone at 6:00 AM