It's funny saying goodbye to a place I don't know all that well.

Before Phil and I left Bristol, we had a list of things we wanted to do--visit a favorite restaurant, walk along the harbor, eat jerk chicken at St. Pauls neighborhood carnival, stroll the streets of Bath one last time. There were also some quintessentially Bristol / Southwest England things we had missed--I went on a self-guided graffiti tour, and dragged Phil through the glorious tourist trap that is Wookey Hole (combination cave, circus school, dinosaur park, penny arcade, paper mill museum, and about two thousand other bits and pieces. Why have I never blogged about this before?!). We also took the opportunity to say a proper goodbye to Europe; I visited a friend in Switzerland, we spent a weekend with another friend in Paris.

I mention this because Tuesday was my last day subbing at the local school. It seemed momentous, yet I left the building late, so few of the staff were around, and I didn't say goodbye to anyone. That evening, instead of celebrating, Phil and I went from room to room of the house, creating a list of valuables for the movers.

There have been a lot of sad goodbyes with writing friends, and my incredible SCBWI critique group. In terms of favorite places, I'd like to take a few more pictures of the hiking trail to remember it by. And the Eric Carle Museum. But that's about it for Amherst. 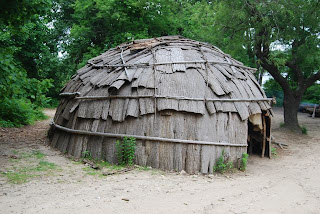 Last weekend, Phil and I went to Plimoth Plantation, a place I've dreamed of visiting ever since I taught history in Chicago, way before I lived in Massachusetts. Unexpectedly, my favorite part of it was meeting the Wampanoag people who live there, not role-playing, but recreating their tribal life in the 1600s. It was so fascinating, and I had so many more questions that only occurred to me later. I'd love to live in this state longer, learn more, see more. 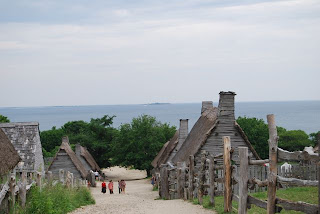 I realized as we drove there that I'd never even been in that corner of the state. I've never been to Cape Cod. Rick Steves, the travel guide author and guru, tells people to always assume they'll be back. That way you never overload yourself trying to see everything, but appreciate the bits you do see. Even better, it's not like Massachusetts is a distant, expensive European trip. I'm looking forward to coming back.

And yes, this is a picture of roosters (at Plimoth Plantation) eating lobster. I've lived here less than a year, but this seemed quintessentially New England: 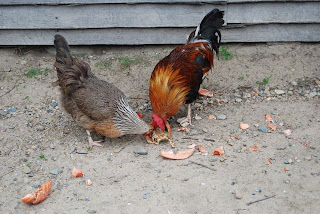 *All pictures taken by Phil Anderson*