This past May, at the New England SCBWI Conference, author Padma Ventkatraman presented as part of a discussion on writing historical fiction. I'd never heard of her or her writing before, but she was wise, loud, opinionated, and very funny: just my type of person! So upon visiting the Durham Library for the first time last week, when I happened to spot Padma's debut novel, Climbing the Stairs, I immediately grabbed it. While I vaguely remembered the plot, I couldn't have told you anything about its historical backdrop. Here's the official blurb from Goodreads: 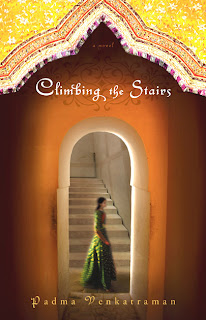 "During World War II and the last days of British occupation in India, fifteen-year-old Vidya dreams of attending college. But when her forward-thinking father is beaten senseless by the British police, she is forced to live with her grandfather's large traditional family, where the women live apart from the men and are meant to be married off as soon as possible.

Vidya's only refuge becomes her grandfather's upstairs library, which is forbidden to women. There she meets Raman, a young man also living in the house who relishes her intellectual curiosity. But when Vidya's brother decides to fight with the hated British against the Nazis, and when Raman proposes marriage too soon, Vidya must question all she has believed in."

Weird personal tidbit: my grandfather directed a repertory theater company that toured India. He actually met Nehru, the first Prime Minister, and used to keep a photograph of that day in his office. So I'm embarrassed to admit I know very little about India's fight for independence, and feel lucky to have stumbled upon Climbing the Stairs to garner a bit of an education. I was also fascinated by the tensions amongst the different characters, with such disparate hopes for their country. Is non-violence always the way? What if a nation needs to protect itself? What if a person needs to save his or her family? Padma juggles all these deeper questions amongst a gripping story of a girl's struggle for independence (it reminded me a lot of Jennifer Donnelly's A Northern Light). 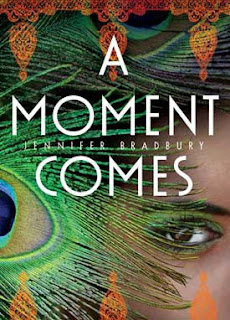 So upon finishing Climbing the Stairs, I instantly went searching for more literature about India's Independence Movement. Thankfully, the School Library Journal had a recent article, "New Titles On India's Struggle for Independence," and I instantly downloaded Jennifer Bradbury's A Moment Comes for my Nook.

Bradbury's writing really transported me to 1947, and the hot, busy streets of India, aflame with tension and violence right before the British-designed partition takes effect, separating Sikhs and Muslims into different countries. I actually gasped aloud at one moment, and my husband was concerned something was wrong. It was--characters were in danger! Also like Climbing the Stairs, A Moment Comes takes several different viewpoints to allow readers to see that there is no simple answer to the violence and injustice.

In her author's note, Bradbury talks about how the numbers of people affected by the partition's relocation and violence is mostly unknown, only a range of estimates. As she writes, "Ultimately that range of numbers is more haunting than a definitive number might be. Because among the countless tragedies and casualties of the parition, perhaps one of the greatest is not knowing how many voices were silenced, how many stories were cut short and lost forever. I can only hope this story does honor to theirs."

One of the things I love about historical fiction is being transported to different places and times, and expanding my mind. This is doubly true with diverse historical fiction, learning about a time period I've never understood, stories I'd never heard. Both these books truly captured my mind, heart, and imagination.

Any other recommendations (fiction or non, children's or adult) about India's Independence? Or other favorite historical fiction?
Posted by Anne M Leone at 6:00 AM