Happy weekend! I'm giving myself a bit of a break on the writing this morning (partly because I've decided my latest plot development is naff). Then I thought, "Hey, I should write a blog post on naff!"

So here we are. Naff, according to the Urban Dictionary, is: "British slang, today meaning uncool, tacky, unfashionable, worthless..." Apparently it may also have been gay slang used to refer to heterosexual people. Too funny. And either way, a great word!

Also, while I'm sharing Britishness with y'all, have to share this picture: 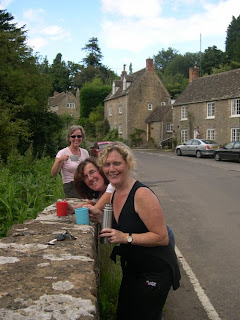 This is my former co-workers enjoying their tea after our day-long walk in the Cotswolds. The Cotswolds is a beautiful area of England known for its rolling hills and picturesque towns (you can see the stone houses in the background, and we're standing on a stone bridge over a babbling brook. Really!). And after a warm day hiking, what could be better than tea? So very British and a habit I just haven't been able to pick up yet.
Posted by Anne M Leone at 6:34 AM