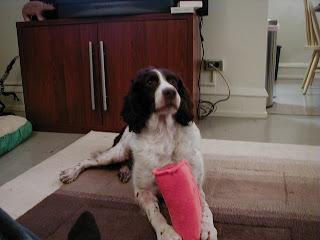 Yesterday Phil's parents had to put Connor to sleep. Over the weekend he fell down the stairs and when Kevin and Holly brought him to the vet, they learned he had calcified discs in his back, bones rubbing against each other, and bone spurs poking into the nerves along his spine. He was prescribed pain medication, but it didn't seem to work. Yesterday he couldn't finish his breakfast or his walk and Kevin and Holly knew it was time.

Apparently the vet cried when he put Connor to sleep. Connor has that effect on people. For those of you who never met him, Connor came to me and Phil through American Brittany Rescue. We were told he was 6, but our Chicago vet expected he was closer to 8 (making him 14 when he passed away). He had been found wandering the streets of St. Louis, and it was up to ABR and the local kennel to determine his name and birthdate. He had a long scar above one eye, and later xrays would show his backend was full of buckshot.

But for all that background, when we adopted him ABR told us he was a "gentleman" and it was true. He sat for all of his treats, wooing countless cashiers at PetSmart into giving him whole handfuls. He never barked or jumped up on people. Our next door neighbor in Chicago fell in love with Connor, always stopping to check in on him and pet him. He declared once to another neighbor on the elevator that Connor had made him believe in dogs again. Connor even befriended a group of unruly teenage boys, who affectionately called him 'Killer'.

He loved to play, too. Anything that squeaked had to be ripped apart. He would race across parks to capture tennis balls. At night he used to leap up onto the bed with Phil and I and wrestle and growl and roll over for belly rubs. He loved walks so much that he would pull the entire way, even until he was gagging and gasping for breath. Because of his love for people and walks, I used to take him everywhere, parks, middle school soccer games, to drop off videos or library books, to pick up dog food. Connor and I had a brief stint volunteering in a local PetSmart, visiting with customers (two-legged and four-legged), and even judging a doggie fashion show.

It was this constant presence that made it so hard to leave him behind with Phil's parents when we moved to Bristol. I expected his wagging tail and unbridled excitement every time I came home. I would get up at 6 and look for his chin at the side of the bed. My errands seemed so lonely and long. Kevin and Holly offered to take him in, and have been the best doggie parents that we could have imagined. They have been there for him as his health and strength failed, and loved him so much. Kevin even cooked all of his food. I know they will miss him terribly. And even though it's so sad and hard, I'm so pleased they had the courage to say goodbye to Connor before his pain became too much.

Of course, we all know he's gone to a better place now. The squirrels will be slow, he will be fast, and he'll be able to see them with both eyes. And his sleep will never be interrupted with a nightmare again. 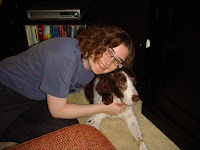 Connor and me this past July
Posted by Anne M Leone at 9:03 AM