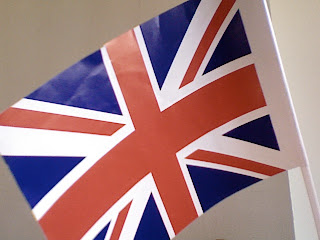 Good news! This morning from the post office I picked up my and Phil's new visas. Have to hand it to the UK Border Agency; after a mess of stress and bureaucracy, the turn around time on these visas was only about three weeks. Phil had heard horror stories of seven months, lawyers, lost passports. But we now officially have permission to remain in the UK another two years. It's reassuring to be legal and have the documents to prove it.

One of the readers of this blog recently asked me how I had ended up in the UK. Now that I'm legal once again, it seems like a good opportunity to tell my story.

The short answer: I'm married to a brilliant scientist who studies fossil fish jaws (Jurassic Park 4 should be ALL UNDERWATER!). In 2007, Phil received a post-doc offer to become an international researcher at the University of Bristol. This summer, he was offered a grant by the European Union to continue his research here for another two years. Under UK immigration rules, as his wife ("dependent"), that gives me permission to live and work in the UK at any job that will have me.

I'm living many people's dreams. I have the opportunity to travel around Europe. I could fly to Venice, and after only an hour and a half and one time zone change, step out amongst the canals. Also, when we moved, Bush was still president, and we looked forward to a more liberal European society: free health care, politicians who believe in climate change, media engagement with the outside world. And it has been fascinating to explore a different language, a different shelf of literature, a different way of life.

But I've learned that living in the UK and visiting London as a tourist are two very different things. Yes, I do have free health care, which is one of the reasons I was able to leave my previous job so easily to go back to school this autumn. The city of Bristol has amazing recycling. Not only can I recycle cardboard, tin, glass and paper, but we also get weekly compost pick up. Plastic recycling is available down the street. I hardly throw out anything.

But after Chicago, Bristol feels very small. And I have been floored by the classist and racist comments I regularly hear that would rarely, if ever, be voiced aloud in the US. Freedoms are also more restricted here than in the US. For example, the legislature recently passed a law requiring anyone who has contact with children (carpooling parents, visiting authors, classroom volunteers, etc.) to pass a criminal records check (which they will usually have to pay for themselves). When I walk out my front door, my movements are caught on CCTV. And I cannot imagine raising a child in England's education system with its national curriculum, frequent testing, and forcing kids to determine their academic fields of study at 16.

Then there are the smaller things: Left behind family and friends. Plane fare home, especially around the holidays, is expensive. The beauty of autumn here pales in comparison to the US (note to self: have to find out why that is). Our inability to find a church we feel comfortable worshiping in. Cricket and rugby are just not the same as baseball and (American) football.

This isn't meant to be a post tearing apart the UK. After all, as Phil frequently reminds me, the US has tons of problems of its own. But at least those problems are familiar to me; like family, I've grown up with those injustices. Moving here has taught me a lot about myself. I'm not as open minded as I thought. Instead, I tend to rather stubbornly cling to the idea that one way of living is better than another. I've also learned a lot about the immigrant experience. If I get frustrated with the bureaucracy, if I get frustrated with people asking where I'm from all the time, if I miss home--I'm a white, middle-class American. Imagine how much worse it could be.

So when people tell me how lucky I am, I usually just nod and agree. Because I AM lucky to be living here. And I'm sure when I return to the US, there will be lots of whining involved. But the story is more complex than that.

I think I have a few other expats or former expats reading my blog. Hi!!! If you're out there, I'd love to hear your stories and experiences about living abroad, similar or dissimilar to my own.
Posted by Anne M Leone at 9:31 AM