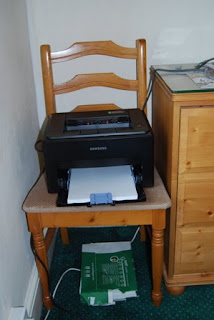 I just bought a printer.

But this is my first printer purchased in the UK. I figured it wasn't fair to my husband's employer to make them support my MA in writing habit with paper and toner.

My husband and I also now own a TV, a DVD player, a radio, a microwave and a toaster (though it only toasts on the bottom half). We have over a dozen dvds and several dozen books. You'll notice we haven't quite made the commitment to a desk yet, though. Because every purchase makes me more uncomfortable.

It's "in" to worry about material consumption. But my husband and I worry much more than most, I think. For starters, we already own a printer, as well as a TV, DVD player and stereo system (I think we sold the microwave and toaster). They're sitting, unused, in a storage locker in Chicago. If we had to do the move all over again, would have sold more of our household? Probably. But we had no idea, beyond two years, how long we would live in the UK, what we would think of it, when we might return to the US. And selling a reliable printer that you've owned for less than a year? Hard.

Of course, I now own a printer which I know I will never bother bringing back to the US. I'd need an adapter plug just to run it. My willingness to sell (and donate!) has developed extensively since moving.

It isn't just the money, though my cheapskate heart does shudder with every purchase. It's the waste that bothers me. And, perhaps even more so, the thought of how hard it will become one day to pack up and leave the UK.
Posted by Anne M Leone at 4:29 AM