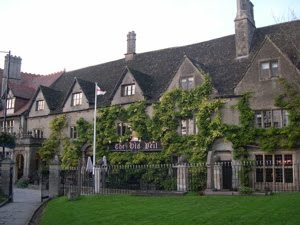 Sunday night, Phil and I took some much needed time off to celebrate our anniversary. We visited The Old Bell Hotel in Malmesbury, which claims to be the oldest continually run hotel in England. Here's their explanation:

"The central part of the building was built in 1220 by Walter Loring, Abbot of the Abbey [next door] from 1208 to 1244. Its function was to entertain important guests, as the Abbey was then one of the most important seats of learning in England after Glastonbury. As far as it is known The Old Bell has been continuously in use as a place of entertainment since that time."

I've actually been there before for work and kept thinking a place this neat, this romantic, and with such gorgeous food should not be used for work. So I had to take Phil back to properly enjoy it.

It was a short trip, but completely relaxing. We wandered up and down Malmesbury's narrow alleyways, lined with stone houses, strolled along the river, poked our heads in various shops. I found a perfect travel bag, which I've been searching for forever! It's big enough for a book and a camera, has a wide, long strap so I can sling it across my chest and hopefully minimize back ache, and it's organic cotton, fair trade and blue with purple stripes. LOVE! Oh, and this morning I had a long soak in a claw-foot bath tub. I don't think I've ever been in such a big bath tub. So yes... much relaxed. 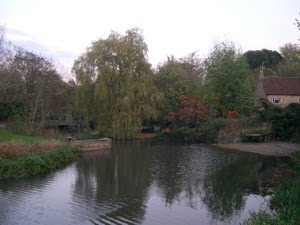 I apologize I don't have more pictures to show off, but of course the camera battery died an hour into the trip.

Oh, but first, one random bit of British trivia for you, again from The Old Bell's publicity:

"An interesting fact about the spiral staircase at the East End is that it rotates in the opposite way to those in a castle. In a building that requires fortification the spiral staircase descends anti-clockwise, so leaving the "sword arm" free for fighting. A staircase that descends in the clockwise direction denotes men of peace."
Posted by Anne M Leone at 9:17 AM