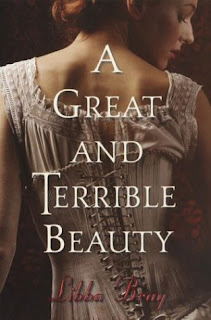 I was so pleased to hear earlier this week that Libba Bray's GOING BOVINE had won the Printz award for excellence in young adult literature. Not that I've read it (I don't believe it's been published in the UK yet). But Libba Bray's first book, A GREAT AND TERRIBLE BEAUTY has a special place in my writing life.

About a year ago, I heard another writer recommend having a book or two to refer to throughout the writing process. She suggested a writer choose a book similar to the book they were writing (same genre, same gender character, same target age, same style, etc). Then, whenever a writer bumped into problems, she could consult this book. It sounded like a great idea to me at the time. I use the books on my shelves regularly, but the idea of always having one go to book made sense. I went through several names: David Almond, Jerry Spinelli, and Libba Bray, among others. At the time I was working on my ghost story, which had gothic elements, historical elements, and a female character with limited freedom, several elements in common with Libba Bray's A GREAT AND TERRIBLE BEAUTY.

So for the past year, A GREAT AND TERRIBLE BEAUTY has had a regular place on my dining room table. When I was rewriting my beginning, trying to increase its tension, I looked to see how Bray had written her beginning. This past week, when I was making enormous cuts to my writing, I looked to see when and how Bray used character reflection. A GREAT AND TERRIBLE BEAUTY was not my favorite book when I first read it. I enjoyed it (and the books that follow in the trilogy), stayed up late in the night to finish it, but when I rated it on goodreads, I only gave it a 4/5. However, since then, it's become an invaluable book for me, and I'm happy to say it's provided me with a lot of writing wisdom this past year. Thanks, Libba and congratulations.

What books do you keep close by your side to help with your writing?

**UPDATE**: Here is the fabulous Libba Bray describing on her blog the moment she got the call that she had won the Printz.
Posted by Anne M Leone at 2:07 AM