Anne Reads Books By & About People Different From Her: Junk 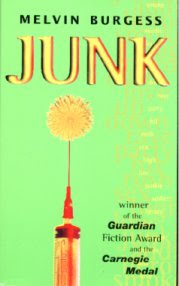 I'm spending the month of February (and beyond) with Anne Reads Books By & About People Different From Her. I thought I cheated this past week when I read JUNK by Melvin Burgess. White author, white characters, even takes place in my current home of Bristol. But I figured I had to read something by him, since Melvin was coming to the UV launch party. Also, in the short time I've lived in the UK, I've heard a lot about Burgess' controversial books (the title that always makes me laugh is his recent DOING IT), and his memoir which apparently his UK publisher is afraid to touch*. My tutor Julia recommended I read his seminal work, JUNK, which won the Guardian Children's Fiction Award and the Carnegie Medal in 1997.

Upon reading JUNK, I quickly realized I wasn't cheating at all. I'm a little ashamed to admit how goody-goody I am. I've never smoked, inhaled or shot-up anything. Really. Alcohol gives me headaches. And I was one of those kids who got good grades, had nice friends, mostly did what I was supposed to do... I think I'm more rebellious as an adult than I ever was as a kid. So I don't think I'm stretching at all when I say that reading JUNK was definitely an encounter with a world different from my own.

JUNK tells of a boy escaping his abusive parents and the girl who follows him. It deals with issues of homelessness, prostitution and of course drug addiction, specifically heroin. The story is told through the eyes of the boy and girl, but also a plethora of other characters they encounter, including a newstand owner, a fellow squatter, the woman they end up living with, even the abusive father. Each character has her/is own perspective and sense of morality. All these snapshots are so believable and so different. Also the reader is able to read between the lines and see the lies and truth behind assertions. 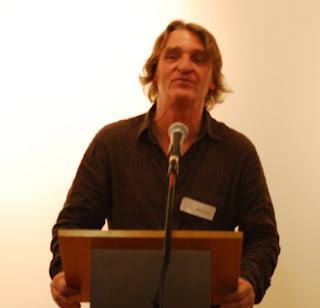 The novel was published with a lot of controversy, and I must say, it certainly doesn't hide the ins and outs of starting out as a prostitute, the high heroin gives, etc. But it also shows how difficult it is to escape addiction, the abuse and devastation addiction can lead to. It doesn't hold any punches and offers no easy answers.

Interesting Melvin Burgess tidbit: at the launch party he mentioned that each book he writes is quite different and involves a lot of research. He joked he might be a richer man if he just wrote DOING IT 2 and DOING IT 3. But he's afraid he would get bored. I'll have to explore more of his work. My classmates said his fantasy is quite good.

Oh, and just to brag, here is my copy of Undiscovered Voices, complete with Melvin's signature: 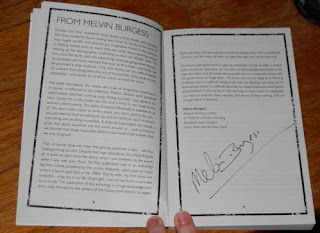 By the way, this is my 100th post. Pretty exciting, huh? Thought I would do something celebratory when I got here, but seeing as post 99 was the Undiscovered Voices book launch, I think my blog has had plenty of celebrating lately. Now it's back to work!

*Actually, I still intend to write about Melvin Burgess for my Reading British series.
Posted by Anne M Leone at 1:45 AM