I once told an artist friend that every time I visit an art gallery, I'm filled with an irresistible urge to write. I'm surrounded by incredible art and I can't help but want to create my own. My friend told me she feels the exact same way, except that art galleries make her want to paint. "That's how you know you're a writer," she told me.

I feel the same way about Project Runway. People unfamiliar with the TV show are often surprised I watch it avidly. Yes, I am wearing rainbow striped fuzzy socks today--so?? While I might not put it into practice very often, PR has made me much more appreciative of the fashion world. But more so, I love PR because it makes me think about art and creativity in general. PR makes me want to write.

I've blogged before about how my MA could be a reality show--except better because no one is ever kicked off. Today I've been thinking about lessons writers can learn from PR.

1. Try new things.
Do you remember the lingerie designer who sent baby girl dresses down the runway every single episode? The judges wondered if that was all he could do. New things are often a challenge, but can inform and improve my work. Or they may even surprise me and influence and augment new work.

2. Believe in yourself and your work.
Do you remember the hippy designer who spit on her fabric to mark it? She made gorgeous dresses. Other designers have been subsumed by their clients. The clients want zebra prints and pink lace and the designers happily deliver it, losing themselves in the process. What makes my work original is that it's mine and yours is yours. Trust yourself and the beauty within you to make something no one else can.

3. Stand up for your work.
As a rule, the judges don't like it when designers argue with them. Who would? But every so often a judge admits, "At least she stood up for herself." No one wants to support an artist who won't support herself.

4. But don't be an asshole.
Remember Kenley from season 5? 50s style dresses and a nasty attitude? First she alienated her fellow designers. Then she argued with Tim. Then she snapped at Heidi. Uh-oh. She ended up in the top three and was able to show at NY Fashion Week, but barely. The judges wondered if she could ever be a team player and if anyone would ever want to work with her. Standing up for yourself can get you so far, but kindness and generosity will gain you respect and friends, which is important in a business. 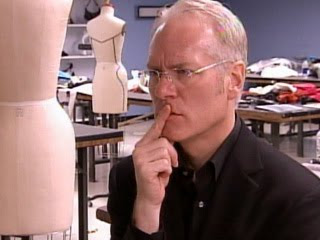 5. Listen to criticism, especially when it's coming from Tim Gunn.
Designers (and writers) who ignore, or worse, interrupt people giving feedback amaze me. If someone, especially an expert like the wise and beloved Tim Gunn, is kind enough to give their advice, you should listen and take it seriously, even if you disagree. After all, if they feel they have something to say, there must be a reason.

By the way, due to living in the UK, I have only watched through season five and am missing the current season. I KNOW. But please... don't tell me ANYTHING about this current season, okay? Thanks.
Posted by Anne M Leone at 1:45 AM