My love affair with Charles Dickens

Writers aiming for publication are often encouraged to read current books. Books like Stephenie Meyer's TWILIGHT, Lucy Christopher's STOLEN, and Carrie Ryan's THE FOREST OF HANDS AND TEETH can show children's writers what's popular at the moment and how far the boundaries for teen writing can be pushed.

But sometimes in my rush to read all these new, exciting books coming out, I forget that books published ten years ago, let alone hundreds of years ago, can be riveting, too, as well as instructive in the craft of writing.

Lately I've returned to one of my favorite writers since I was a teen: Charles Dickens.

I've been re-watching the BBC's adaptation of LITTLE DORRIT.

Okay, it's not strictly re-reading Dickens, but it's extremely well done and showcases much of what I love about Dickens' writing. 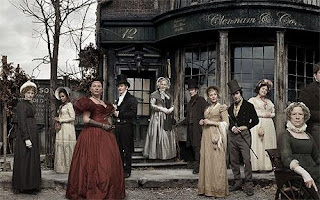 Dickens' novels are filled with memorable characters. He's a master of character names, from Mr. Guppy (which sounds even better with a harsh British accent), to Edmund Sparkler, to Prince Turveydrop (a dance instructor).

And his characters have unique tics and foibles to help them stick in the reader's mind (for me usually long after I finish his books). Remember the frustrated music teacher in BLEAK HOUSE who places his forehead against the wall so often the wall has become dented? Or Miss Flite (another great name!), who has a collection of birds named Hope, Youth, Beauty, Confusion, Jargon, Plunder, Despair, Spinach, and Gammon (etc!), and intends to release them on the day of judgment?

I also love Dickens' plots. They're complex and twisty, raging across London and the countryside, from debtors' prisons, to manor houses, to jails, to lawyers' offices, and they always have these magical moments where you realize two disparate characters were once brother and sister, or lovers, or friends, and society has carried them away from each other.

I find Dickens' novels a bit magical, too. Miss Havisham in her disintegrating wedding dress, Mrs. Flite's birds, the business and home of the Clennam's crashing to the ground at the end of LITTLE DORRIT. It's not Harry Potter type magic, but more magical realism. Even in the midst of despair, all people are inter-connected, wrongs will be punished, lost children found.

When I read (or watch!) Dickens, I become engrossed in his world. And even though he wrote giant tomes for adults hundreds of years ago, and it sounds a bit stuffy to say so, Dickens is an inspiration to me as a writer.

What classic works speak to you?
Posted by Anne M Leone at 2:00 AM