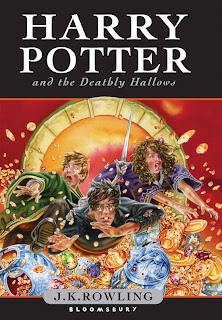 I imagined it would be a fun re-read, but I wasn't prepared for how much I enjoyed the book the second time around. It's been years since I read any Rowling (actually, probably 2007, when Deathly Hollows first came out), and then I was anxious for the characters, reading quickly and late into the night to figure out what happened.

This time I already knew the outcome (more or less), and could revel in the story, the characters, and the world Rowling created. And I was absolutely blown away! I think it's become a bit intellectual to dismiss Rowling, to point out her over-use of adverbs, or long-winded storytelling. But what a book! What a story-telling master! In my mind, she has earned every bit of her fame.

Rowling's a master of world-building, and has created such a realistic, magical world, no wonder it inspired not only movies, but a theme park. People want to live there! But what also impressed me was how she relies on her readers to remember the details of her world. She doesn't bother explaining from book to book what every spell means, or how the Floo Network works, she just assumes we remember (thankfully for me, there's also an extensive repository of HP knowledge online, too!). It makes the world even more absorbing and believable.

She's also a master of character arcs. I've been struggling with my own characters lately, so how incredible to see the two billion characters Rowling has all have the perfect ending, a perfect moment in the sun, and a realization that changes everything for them. Since finishing the book, I've found myself, even a week later, still thinking about that moment where Bellatrix and Mrs. Weasley duel, or Harry naming his son Severus, or Lupin making Harry his child's godfather. Even all these years later, I get chills thinking about the first time Harry sees the thestrals at Hogwarts (that's probably my favorite Harry Potter moment of all). I think that's what makes the books such page turners. I had to know what happened, to everyone, because I trusted Rowling to pull everyone's story to a close.

Speaking of Rowling's two billion characters (approximately), I was also surprised at all the voices. They're so distinct! It helps that every time I read Ron, I can hear Rupert Grint's voice in my head. But regardless, each character is written with so much individuality, they're easy to tell apart, even when they're all arguing with each other.

So it's been an absolute joy to re-read. Someday when all the hype is over, and when life is particularly quiet (hah!), I'd love to settle down for a couple of weeks and read them all again, back to back.

Do you have a favorite image or moment from Harry Potter?

I've been re-reading a few classics lately. Next week I'll post my thoughts on a very different book, Little House on the Prairie by Laura Ingalls Wilder.
Posted by Anne M Leone at 2:00 AM