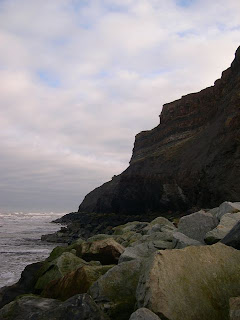 It happens at the end of every manuscript I write. Someone mentions I could use a few more chapter-ending cliffhangers, and it's the mental equivalent of throwing myself off a cliff. How I hate writing cliffhangers.

Maybe it's because I do most of my reading before bed. Yes, cliffhangers do keep me reading, but I can get a bit resentful of them, too. Sometimes I just crave a nice stopping point.

Also, writing cliffhangers doesn't come naturally to me. As my latest beta reader said, I tend to end my chapters "like they are movements… that long final note… very Bach!" Isn't that beautifully poetic of her?! However, she suggested I tweak some of my scenes so they end in the midst of action rather than reflection.

Anyway, while I'm in this quiet time between projects, I thought I'd do a bit of research into cliffhangers. You know, so I can be better about including them with my next project (I say that a lot, don't I?).

My go-to resource on most plot-related things is the wonderfully organized and helpful Plot & Structure by James Scott Bell. Bell has created a list of nine different types of cliffhanger endings (or as he calls them, Read On Prompts):

Obviously, some of these are quite similar. You could probably reduce them into fewer categories, but I like to have more categories, as I think it gives me more space to come up with ideas for my own cliffhangers.

Next I sorted through some of my favorite books (Holly Black's White Cat, Keren David's When I Was Joe, Jandy Nelson's The Sky is Everywhere, and C. K. Kelly Martin's The Lighter Side of Life and Death) to see what kind of cliffhangers they used (SPOILER NOTE: I'll mostly avoid character names, but if you're in the middle of one of these books and really don't want to know, avert your eyes!).

"A knife blade springs up out of the ebonized hilt in his hands. "What have we here?" [he] says, poking my calf where the stones are sewn up in my skin. The whole area throbs when he presses on it. Infected.

Here's another classic "Impending disaster" from one of my favorite thrillers, Keren David's When I Was Joe:

"And then a car comes screeching around the corner and there's a loud cracking noise -- bang! -- and [he] shoves me back through the door before he stumbles and falls, blood seeping bright through his shirt."

Here's another "Impending disaster" with no blood, but rather a terrible emotional threat from Jandy Nelson's The Sky is Everywhere. It could probably also be qualified as "Dangerous emotions," as Lennie is about to kiss her dead sister Bailey's boyfriend:

"When I wake again, I'm facing him, our bodies pressed together, breath intermingling. He's looking at me. 'You're beautiful, Len.' 'No,' I say. Then choke out one word. 'Bailey.' 'I know,' he says. But he kisses me anyway. 'I can't help it.' He whispers it right into my mouth. I can't help it either."

When I think of cliffhangers, these are the types I think of. You HAVE to turn the page to find out what happens next. But I was surprised to discover that the majority of cliffhangers (even in thrillers like Black and David's books) are not impending disaster.

Take this example from White Cat:

"I wish I could say that I don't think about the con when I deal with people, but the difference between me and my mother is that I don't con myself."

I think it's a great way to end a chapter, but as my beta reader would say, it's more of a final note than a cliffhanger. However, I think it is ominous, and does work as a cliffhanger, perhaps a "Portent" of danger to come, also a "Secret revealed" about Cassel's character.

I wanted to check some non-thriller books (like Jandy Nelson's) to see how those authors kept up the tension. Here's a fabulous "Secret revealed," "Announcement," and "Reversal" from C.K. Kelly Martin's The Lighter Side of Life and Death (but not a spoiler! It's the end of the first chapter!). The main character has just had sex with his best friend. He's pretended to be all knowledgable and experienced, but then he reveals: "Because, yeah, it was my first time, too. Kat Medina is my first time."

Here's another great (and funny) "Announcement" and "Surprise" from When I Was Joe:

"But when I open the door to her room, there's someone in there. Two people, sitting on [my friend's] bed. One's a bloke... I think it's [my friend's] trainer, the one who looks like he should be in Boyzone. And he's kissing my mum."

Here's a different sort of "Announcement," as well as "Dangerous emotions" from Jandy Nelson. It makes my heart stop in my chest:

"This is us since my sister Bailey collapsed one month ago from a fatal arrhythmia while in rehearsal for a local production of Romeo & Juliet. It's as if someone vacuumed up the horizon while we were looking the other way."

I started this exercise expecting big action twists and impending disaster with every page turn. But all the books I looked at used a much wider variety of cliffhangers, or Read On Prompts, which really is a beter name. There doesn't have to be blood and guts on every page to keep a reader engaged. In fact, the idea sounds rather exhausting. Maybe the lesson here is that I don't need to kill myself over artificially placing cliffhangers. All of the books I looked at have an engaging, driving through-line, but not even the thrillers have a twist at the end of every chapter.

However, I've also discovered that cliffhangers, of whatever form, really do work. It's been a struggle not to ditch this blog post and just curl up on the couch and read--even though I've read all of these books before (many multiple times!). It's worth my time as a writer to think about how to include more twists and reveals at the end of chapters.

Are you good at cliffhangers? Do you enjoy them as you read? When in your writing process do you think about including them?

*Note: The picture is mine, the rocky cliff face at Whitby, England.*
Posted by Anne M Leone at 2:00 AM