Sometimes I get so lazy with culture. It's easier to watch favorite movies over again, and reread favorite books and authors, rather than venturing into new territory and risking disappointment and wasted time. But every so often, I find something I absolutely love, and I wonder why it took me so long to discover it. 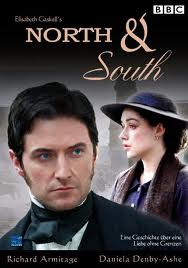 For those of you unfamiliar with Elizabeth Gaskell (honestly, I majored in English and had only a passing familiarity with her name until this past year), she's the author of several novels, including Mary Barton (1848), North & South (1854-5), and Cranford (1851-3), which most UK residents are familiar with, as it was turned into a beloved BBC drama starring Judi Dench (though I have to say, I don't quite get the appeal...). Gaskell was well-known in Victorian circles, entertaining Dickens and John Ruskin, the American author Harriet Beecher Stowe, and was apparently a good friend to Charlotte Bronte.

North & South reminds me of Austen's Pride and Prejudice, except much darker, and with a strong social justice streak. The pride in this case is an assumption that our way is the best and most moral perspective, and discounting the humanity of those we don't understand. The story revolves around the industrial town of Milton (a fictional stand-in for Manchester), and poverty, class, and the formation of manufacturing unions. And a romance between Margaret Hale, a southerner and minister's daughter, and John Thornton, a northerner and manufacturer.

One of the things I like best about the story is that there is no moral high ground, and no character who is proved completely right. Every point of view is respected and questioned (not only those of Margaret and John, but the union leader, a strike-breaker, an Oxford academic...). As someone who's traveled frequently, lived abroad, and struggled with my own prejudices, that deeply resonates with me. Plus, North & South must've been very controversial for its time, with its focus on unions, as well as questioning organized religion, law, and social niceties.

And then there's the movie version! To be honest, I enjoyed the book, and anxiously flew through the pages, but I didn't love it. At times it felt dense, and I wasn't sure exactly what Gaskell was trying to say. But a friend heartily recommended the movie, so I've spent the past week sneaking in an hour whenever I could (it's a four-hour mini-series).

And it's the movie that made me fall in love with North & South. It elucidated the themes clearly, simplified the dense descriptions, and yet hardly changed any of the plot. Plus, gorgeous cinematography! Who knew a cotton mill could be such a thing of beauty? And the acting! Richard Armitage is indeed both threatening and smoldering. And I recognized at least half the cast from other British dramas (Brendan Coyle, Mr. Bates of Downton Abbey, plays the strike leader). I'm not sure which is better; perhaps I wouldn't have loved the movie so much if I hadn't read the book.

Regardless, all of that is to say, I'm grateful to my friends for suggesting North & South (one suggested the book, another the movie), so I figure I should pass that wisdom on. And as soon as I can find the time, I'll be re-reading the book, and perhaps sneaking in a few more hours of the movie as well.  Or at least, until my next new discovery.

What gems have you discovered lately? Any other North & South fans out there?

Note: Things have been pretty busy lately (no, I haven't just been watching North & South on repeat... really!), so I'm planning to take a break from the blog until at least the end of May. In the meantime, stay well and keep writing!
Posted by Anne M Leone at 2:00 AM