An exercise in cutting

For my latest revision of Project Demo, I was advised to cut it by a third.

A third! Okay, I always knew it was way too long at almost 90,000 words, but 60K is svelte! Most YA novels are between 55-90,000, so there's nothing inherently wrong with 90K. Except the longer novels tend to be detailed historical fiction, or fantasy epics with complex world-building. Not edgy, contemporary novels with a hint of magic. So I think my beta reader's right. A Courtney Summers' length novel would make much more sense. But that's a serious diet.

I've lost 7500 in the past few months from shifting around my plot. But that was the easy bit--cutting whole scenes! Now it gets tricky. Here's what I think comes next:

Yes, I know I already did that. But I think I can do more. I have a lovely scene with the main character's mother that never really gets mentioned again. Cut. I have a party scene I adore, but I think I can take some of the important moments in that scene and weave them into a different scene. Cut. Every scene in the novel has to be carrying its weight in terms of character and story development. I'm after losing 22.5K more, so if there are any duplicate scenes (ie, multiple scenes that show my character's relationship with her mother), they have to go.

I spent this past weekend in Switzerland with my friend and fellow blogger Fiction Forge (well, yes, there ARE advantages to living in Europe, including no jet lag and 1.5 hour plane rides to Switzerland). FF was good enough to read through my entire outline with a metaphorical pair of scissors. And she was ruthless! But that was exactly what I needed.

We sat on her balcony with glasses of wine, a view of the distant mountains in the setting sun, and hacked apart my plot. I've had worse evenings.

Does the reader really need to know what happened twelve years ago that shaped my main character into the person she is? If it's not absolutely relevant to the plot, it needs to go. If it is, I need to weave it into a bit of conversation.

You know how they do "time passing" scenes in the movies, with some fun music, maybe some dancing, jumping from scene to scene to scene, to show characters falling in love? Or training? Or growing up? Because Project Demo takes place over a year, I've included a number of those scenes in written form. They're just padding, they also have to go.

For example, I don't need to show my character walking to a door before she opens it and begins the scene.

I know it's there, especially since my character tends to be a reflective, thoughtful sort. I need to make sure her voice is concise as possible. There can't be excessive description, or repetition of any kind (ie, from here on out, my character is reflective, not reflective AND thoughtful!). And every extra "just" and "still" and all those other meaningless words really must go.

Do I sound psychotic yet? Don't worry, I have no intention of gutting my book for an artificial goal. But I do think my reader's right, and the more I can cut without losing Project Demo's soul, the better. Between you and me, I'm aiming for 75K.

Have you ever gone on a massive cutting spree? Any additional suggestions I haven't thought of? How long is your work in progress?

Oh, and just to brag a bit more (and to prove I'm not making things up here on Critically Yours), here's the Alps in the distance: 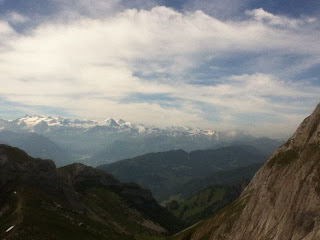 FF has posted a lovely description and picture of the weekend on her blog, too. Ah, writing friends.

Well, seeing as I said in my last post that I'd be back at the end of May, you can probably accurately surmise that life has been a little crazy. But (mostly) in a good way. I've been madly revising Project Demo, but I'm hopeful I'm getting somewhere... slowly. And of course I've been planning an international move--as of last week, we officially even have an apartment!

But I have missed life here at Critically Yours. I can't promise this means I'm back to blogging twice a week... the next few months promise much more chaos. But I'm hoping to post more frequently. Just consider any posts in the near future to be a pleasant surprise!

Speaking of planning an international move, last week my stand partner in my community orchestra asked me what special mementoes from Bristol I would be bringing back to the US. The question took me completely off guard, because the past few weeks have been all about slash and burn--making plans to get rid of practically everything in the apartment! I guess I'm not a very sentimental person. I've got great memories of my time in Bristol, hopefully lifelong friends, and a shelf full of author friends' books. That seemed plenty to me--but I've been thinking about my friend's question ever since.

And good thing, too. Saturday was my final rehearsal and concert with the Brunel Sinfonia, and  the viola section had a little presentation to say goodbye. They gave me a framed poster for our last concert, and a Bristol blue glass vase.

Bristol blue glass is a vibrant blue, wholly unique and beautifully crafted. It's expensive, too, which is why I've never bought any for myself--but when I opened the box the section gave me, my friend's question came back to me, and I was totally touched knowing that I now had a very special bit of Bristol to bring back with me.

So ever since then, I've been thinking about the inevitable process of saying goodbye. Yesterday I stopped by the bookstore to pick up goodbye gifts for my Reading Buddies I volunteer with at a local primary school. On the way home, I walked past Nelson Street, which last summer was the site of a massive graffiti project. I've passed it on the bus numerous times, walked by bits and pieces, but I've never actually walked down the street and taken it all in. I figured this time might be my last chance.

Here's some of the photos I took: 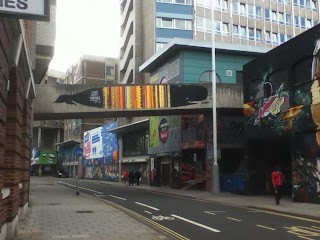 A close-up of the whale: 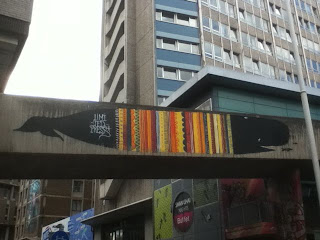 Walking down the street: 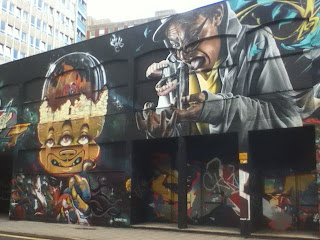 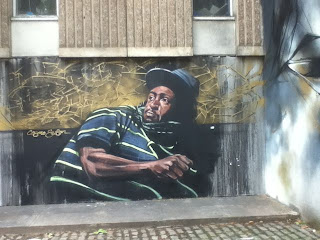 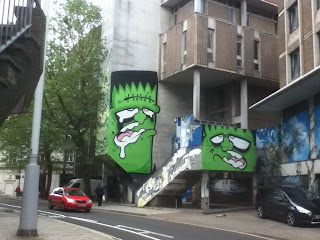 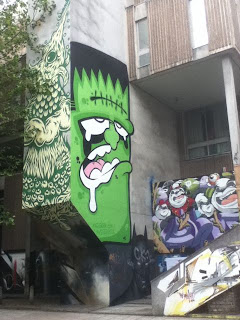 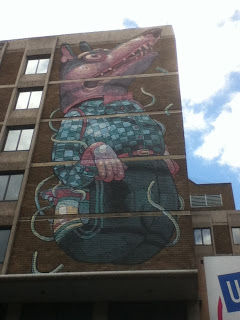 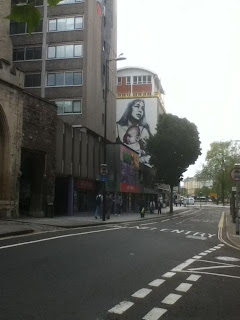 This is me turning onto the side street, Bridewell: 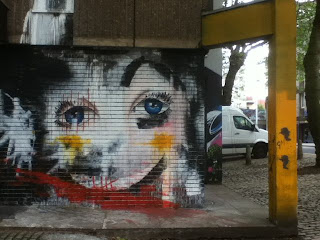 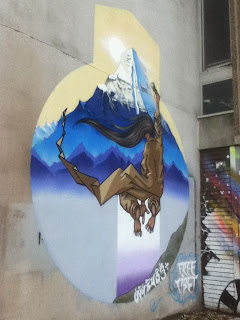 And on the main drag, Rupert Street: 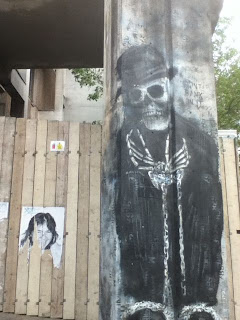 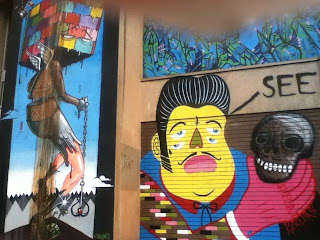 There's a bit more about the project, as well as a lot more photos, here.

I'm sure I'll be posting more in the coming weeks about saying goodbye. In the meantime... welcome back!
Posted by Anne M Leone at 2:00 AM 16 comments