I'm in a funny place at the moment, both physically and mentally. 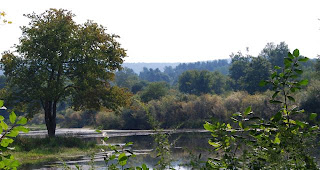 I'm still settling in to a new home, a new town, a different country (thank you for all of the napping encouragement on my last post--I'm feeling much better rested now!).

I'm also settling into a new writing project. While I'm waiting for feedback on Project Demo, I've decided to return to Project Fun. Remember Project Fun? Probably not, it was a short-lived affair last fall to escape Project Demo. The good news is, I've got a full rough draft to play with, an exciting story, and characters I love. Does it make much sense? No, but my drafts hardly ever do--that's the challenge. 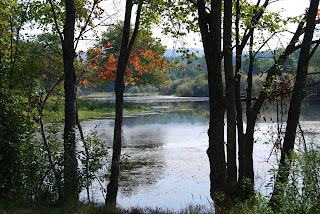 But instead of launching myself full throttle into a new project, especially since I'm not under any pressure or deadlines at the moment, I want to play with a new way of writing, possibly even develop a new routine.

In the midst of exploring the area, I've discovered Amherst has an extensive trail system, including the paved 11-mile Norwottuck Rail Trail, along with several woodsy trail offshoots. Oh, and the whole system is a five-minute drive from my house!

So I've been taking advantage of the summer weather, and more free time than usual, by walking every day. And I've integrated this walking time into my morning writing schedule. I'll work for a bit, then take all my questions and ideas with me on the trail.

Well, maybe. But it definitely means more exercise. And have I mentioned how beautiful it is? This settling in might be going better than expected! 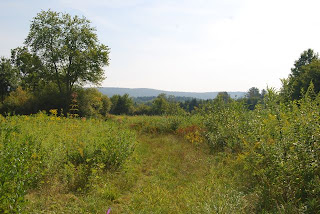 *All pictures are mine, taken on the Amherst trails
Posted by Anne M Leone at 2:00 AM 8 comments

So it's a little different here...

I knew I'd be in for some culture shock, moving from Bristol, one of the UK's larger cities, to Amherst, MA, a town in rural New England. I haven't driven much in the past five years. While I've watched British TV, I haven't watched much American TV or listened to the radio at all, so I'm sure there's some cultural phenomenons I know nothing about. And cultures, even one's own, do change over five years...

I've been keeping a running list of it all in my head.

Walmart and Target make me twitchy. They're so big, rows and rows of things, with so many options. I keep getting lost, probably exacerbated by the fact that I try to stay as briefly as possible. They make even the big Bristol Sainsbury's look quaint!

Cars are huge, including my own, but otherwise driving is fine, and left-hand turns no longer make me nervous. It took me forever to figure out how to park in a lot again, but the Chicagoan never left me--you should've seen the mean parallel parking job I did the other day!

Yesterday, I tried to exchange £50--no need for it to make its home in a drawer, that's a lot of money! First I tried a small, local bank. They told me they didn't do foreign currency exchanges. So I tried my bank, its big central branch, since I was driving right by. No. They suggested Bank of America. So I dutifully went to Bank of America. B of A would only exchange money if I had an account. TD Bank was across the street. They'd happily do it, but only for a $10 charge. Goodness! In the UK you could exchange money at almost any post office, let alone bank or currency exchange shop! But I guess there's a few more currencies floating around the area.

So I'm still in possession of £50, though the B of A teller suggested I find a friend with an account. Anyone have any better ideas?

There's some other, more expected things. The cheese isn't as good. Or, it is, I had some very nice smoked gouda the other day, but the Whole Foods brand cheddar is an orange, rubbery imitation compared to Sainsbury's store brand cheddar. The chocolate is quite nice, but I'm struggling to find my favorite brands. And I knew this would be a problem (and I know it's August!) but I miss my British hot chocolate!

Plus, I was quite nervous the first time I went grocery shopping--everything was so expensive! Then I realized I was thinking in pounds, not dollars.

It's hotter here. Much hotter, which made moving in difficult. It's cooled down a bit now, thanks to a series of storms which flashed through here. A resounding clap of thunder woke me in the middle of the night--and I had no idea where I was. It's been a long time since I lived some place with summer storms.

Actually, I still wake in the middle of the night, unsure where I am, even after three weeks. I think it's partly because our apartment is tucked back in the forest and so dark and quiet. But I'm also getting used to the position of the bed, the furniture, the room, the fact that it's all mine.

And did I mention being tucked back in the forest? And the big bugs? Thank goodness Americans believe in screens. And it's lovely, but I'm directly off a rural highway, so while there is a walking path on the edge of the road, it's not very comfortable, nor are there many places within walking distance to go. The other day I parked at one end of the strip mall and walked to get groceries at the other. I know, craziness. But I miss walking.

Thankfully there's lots of trails and state parks nearby, including one just down the road. I'm driving there this morning!

I have to say, though, I'm glad to get away from the British "reserve." People here are so chatty and friendly, everyone from sales clerks to bank tellers, to waiters... and it's not because I'm unique or because I have a "cute" accent. And unlike one of my European friends maintains, I don't think it's an act. I could barely get a word in edgewise at the post office! Most Americans genuinely seem to like talking with other people. It's a nice change.

As is being in the same country, even the same time zone as family and friends. I'm still a phone call or a plane ride away, but somehow I feel so much closer. And that's nice, too.

Now if only my British friends could be the same distance away...
Posted by Anne M Leone at 7:51 AM 20 comments

In the meantime, there was a move out of Bristol, an international flight, a domestic flight, a train journey, a road trip from Chicago to Amherst, Mass, and an (ongoing!) move into the new house (please don't ask me to explain all the moving travel--I hardly understand it all myself!). We've been here for just over two weeks now, though it's hard to imagine it's been that long, when so much is still up in the air.

I'm finding it difficult to ease back into writing. While waiting for feedback on Project Demo, I've been playing with old story ideas, for just 30 minutes to an hour a day. Too much and I'm physically and mentally drained. Yesterday was my longest writing day yet. I cranked out a revised scene for Project Fun for a writing group. It took a little over two hours. But I had to stop halfway through to take a nap, I was so exhausted.

Apparently I'm not alone. Agent Betsy Lerner blogged yesterday about one of her authors who always needs to nap (sometimes multiple times a day) when starting a new project. Betsy suspects it has to do with fear. Nah, I thought, I've been scrubbing an oven for multiple hours a day, moving boxes back and forth to any free space in the apartment, I'm just exhausted.

But my writing narcolepsy, and every day narcolepsy, continues. Now that I think about it, maybe Betsy's on to something. Maybe not only jumping into a new-ish project, but setting up this whole new life, in a different state, a different country, is a little scary. Maybe I combat that by falling into unconsciousness periodically throughout the day, letting myself give up for just a while.

I'm also thankful for a lovely writing space. I thought I was going to make a spare bedroom into an office. I had grand plans for a beautiful desk, all my books in one place, etc. But in the meantime, I've situated myself at the kitchen table, and I'm not sure I want to leave. I get a cool breeze from the back yard, my wind chimes tinkling, a view of the forest beyond... I think I could be quite happy right here. 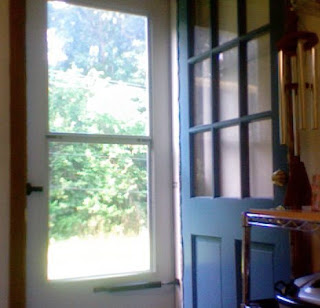 I'll leave you with that lovely image (though apologies for the quality! I can't seem to track down my camera's cord). Anyway, the oven still needs some scrubbing, and there's piles of stuff in my "office" to sort through, and...