November is approaching. For me, November means the new routines of the fall are finally sinking in. It also means longer days and colder nights. And legions of writers pushing themselves to write a novel in a month (NaNoWriMo).

I'm not a NaNo-er myself (see Why I'm Not NaNoWriMo-ing), but I have the utmost admiration for those who are, especially those who are attempting it for the first time. I find those writers' enthusiasm and drive truly inspirational. I must--I searched through my archives for this post, and discovered I've blogged about NaNo (setting goals, sharing links, resolving to slow down, etc) every November since the blog started.

This November I find myself wondering if I can use NaNo to push myself just a little bit harder.

Have you you seen this amazing post from author Rachel Aaron about writing 10,000 words a day? It's been around for a while, but it's worth a read. Aaron breaks writing speed into three categories: Knowledge, Time, and Enthusiasm. And while I can't ever imagine writing 5K in a day, let alone 10, her methods are totally approachable and helpful.

Earlier this month, agent Rachelle Gardner blogged about increasing productivity, and then this past week offered a free opportunity to try Rescue Time to increase your productivity.

Unfortunately, at least for this November, I'm not looking to increase my word count. And while Rescue Time sounds incredibly useful, I'm not sure it would work for me. But I would like to harness this NaNo spirit. My goal for November is to finish my first revision of Project Fun. Strangely, my goal last November was to finish a first draft of Project Fun! A lot of other stuff happened in between, but I'm glad to be back to it--and to have the chance to pull it all together this time.

Do you have a goal for November? And have you ever found a way to consistently increase your output / efficiency?
Posted by Anne M Leone at 6:00 AM 6 comments

Once Upon A Time: A revelation

After hearing good rumblings for the past year online, and learning there was a new season about to start up, this past September I finally decided to watch Once Upon A Time. Thanks to Hulu, I saw the first and last episodes of the first season, plus a handful of other episodes, gained a basic understanding of the plot, and was intrigued. Even while on vacation, I hurried home to my hotel on a Sunday night in Washington DC to make sure I caught the first episode of the new season.

But it was after the second episode of season two, when I discovered my sister was a big fan and we were chatting things over, that I truly became hooked. Because my sister had some theory about how this one character was secretly The Queen of Hearts. And I was all, "What? Who's the Queen of Hearts?" I realized I was missing a lot of cool details (and characters).

So now, a few weeks later, I'm ravenously watching all of season one on Netflix, and I am totally and utterly hooked.

For those of you who don't know Once Upon A Time, it stars a woman named Emma, who is invited to Storybrooke, Maine by her biological son, who she gave up for adoption ten years ago. Her son believes everyone in the town is a fairy tale character, cursed to forget their true home and identities, and that only Emma can break the curse.  I'm honestly surprised it's not getting more buzz. It's got these gut-wrenching themes of destiny and identity, and whether or not life can ever really be like a fairy tale. It's also totally over the top, but the cheese is mostly fun, especially when it's tongue in cheek (like the thug in jail who is revealed to be a dwarf, and is mindlessly whistling Whistle While You Work). Plus, not to get too political about it, but the cast and story is unusually female-centric.

But my favorite part about it, especially now that I'm watching every episode, is all the revelations. If you think about it, a plot where every character has a doppelganger with an unknown past life is ripe for revelations. But true gasp-inducing, sit up on the couch, email your sister type revelations are hard to craft. You have to make sure the audience understands enough to get the revelation without anyone needing to explain it, but they don't understand too much and figure out the twist early. And everything needs to be revealed in a single visual moment. Once Upon A Time has me thinking about my own revelations, and how I can parse them back to create the same shocked gasp.

Once Upon A Time is definitely worth a watch. And for those of you who are already hooked--what's been your favorite revelation thus far?
Posted by Anne M Leone at 6:00 AM 4 comments 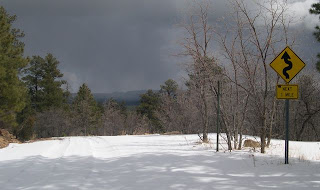 I'm at that stage in the revision process where I'm actually enjoying myself. The setting feels so real, all the elements of the plot are coming together. I even got emotional alongside one of my characters yesterday.

This is the stage where I believe in the story. I study the calendar to figure out how quickly I can write the rest. I imagine some day Project Fun could be a real book.

It's also the stage where I expect disaster to strike at any moment: a huge, looming plot hole, or the realization that my character isn't the slightest bit sympathetic, or that the story isn't marketable, or... something. I search for it every day, trying to find it before it attacks me unawares.

But maybe, a tiny part of my brain whispers, maybe this time it will all work. Maybe this will be an easy book.

Have you ever written an easy book?

*The picture is mind, from a "spring break" trip to the Grand Canyon*
Posted by Anne M Leone at 6:00 AM 6 comments

In the process of moving, I've been assembling a lot of furniture. And the other day, while putting together a particularly heavy futon, I had a fascinating insight into revising Project Fun.

See (in case you haven't been blessed with putting together a futon recently), futons basically come in two sections: the bendy part the mattress sits on, and a rectangular base. Now, you can't assemble the futon without putting together the base first. However, the bendy bit has these rollers that need to fit into grooves on the base. So it's a catch-22. The base can't support the bendy bit if it isn't tight and secure. But if it's too tight and secure, the bendy bit's rollers can't fit into the base's grooves. The solution (after much bickering and cursing)? Phil and I made the base tight and secure, then placed the bendy bit over it. Then we loosened the base to get the rollers into the grooves, and tightened everything again.  Just how the pros do it! Or something.

Anyway, Phil was sweaty and frustrated, but I was excited. Because it suddenly occurred to me that revising a novel is just like putting a futon together. Without a solid structure (ie an organized plot and a fleshed out magic system) you have nothing to build your revisions on. But revisions also need to be organic, open to new scenes, new characters, new magic.

See, I'm usually such a linear writer. I'll revise my beginnings ad nauseam, until the words, the dialogue, the setting, everything is perfect. Then I move forward and discover the plot doesn't work with my changes. So I move back to the beginning and revise it again. Then I move forward two more chapters, only to discover again that the plot doesn't quite work. But it occurs to me, if I could get my base tight and secure first, I might be able to cut down on the number of revisions.

So I decided to start with my climax first.

I know! Crazy, huh? But all the plot threads and magical elements come to a head in the climax. If I could figure it out first, then that would be one screw, tight and secure. Then I could use that structure and knowledge to move to my next screw, and my next. And once I have all the major plotty chapters down (ie, my base), I can build my character development and setting, and all those elements around it. Of course, I may need to go back later and unscrew my climax to make it all fit. But hopefully that will be a minor tweak, just far enough to get those rollers in.

Is this making any sense? Thankfully it is to me! Last week I wrote my climax and discovered several plot holes I hadn't anticipated. But I'm working through them, and can already feel the novel tightening itself.

Have you ever worked backwards, or non-linearly before?
Posted by Anne M Leone at 6:00 AM 4 comments