Annie: A masterclass in writing 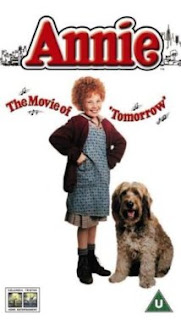 Annie and I have a rather complicated relationship. See, I was 4 when the movie premiered, frequently called Annie, and had a mop of curly blonde hair to boot. Over the years, people would often compare me to Annie, give me gifts of Annie-related merchandise, and assume I must love her. I distinctly remember a Little Orphan Annie pillow with those freaky empty eyes--at some point in my childhood I colored in her pupils.

But of course I did love Annie... plucky heroine with a dog, great musical numbers, and living her wildest dream. How could I not? And last week, while searching for books and movies similar in plot to my new work-in-progress, I ended up re-watching Annie for the first time in decades.

Some of it hasn't aged well, the stereotypical portrayals of Mr. Warbucks' Asian bodyguards (Punjab and The Asp), the cultural references, that ridiculously long "Let's Go To The Movies" Radio City Music Hall number. But mostly, I was absolutely delighted. My husband will tell you. I've been singing the rest of the soundtrack for the past week.

But even more amazing? Watching Annie was a complete masterclass in writing.

Firstly, think of the setting, which ranges all over New York. There's the busy, poverty-stricken neighborhood of the orphanage, Mr. Warbucks' mansion, a radio studio, Radio City Music Hall. Even the orphanage is like a fun house, with rows of beds, multiple stories, ornate staircases in between, with sheets, laundry carts, and kids singing and dancing. Mr. Warbucks invites Annie on his personal helicopter to visit FDR in the White House. The climax is on a precariously high railroad bridge.

I've been warned in the past that too many settings can make a story feel disjointed. But all these locations simply felt as if they belonged, were part of the whole, and showed New York in full, fun detail. Further, each setting illuminates the characters: Annie's impoverished world, and Mr. Warbucks' wealthy, but ultimately empty world.

I was even more impressed by Annie's use of ever-escalating tension. Take the scene where Annie's imprisoned in the orphanage's office closet after her foiled escape. Grace, Mr. Warbucks' personal secretary, arrives to pick out an orphan to stay for a week at the mansion. Annie's able to mime all sorts of details to Grace, so Grace will pick Annie, and Annie will finally be able to escape for real (yay!). Then Miss Hannigan announces that she won't let Annie go (rats!). Grace argues with Miss Hannigan, convinces her to let Annie leave (yay!). Then Annie's dog appears (rats!), and Annie has to start all over again, convincing Grace to let her take Sandy as well. This pattern, of Annie's excitement, followed by dashed hopes, was repeated in almost every single scene, making for fast, tension-filled storytelling.

I could say much more, about the movie's rapid pace, the interweaving of themes, the reliance on a child's point of view... but I'll stop for now. I'll leave you with my favorite song, from the star of the movie (of course, not Annie but the inimitable Carol Burnett as Miss Hannigan!). Enjoy!