Some of you are probably thinking, "Life changes?" But Anne, your life is all about changes! You just moved to North Carolina! And a year ago, from overseas to Massachusetts. True, but throughout all that, daily life has been pretty same-y. I've been writing a ton, as well as taking care of everything on the domestic front, and working or volunteering at schools a few days a week. I've had time to play in an orchestra, join reading groups, meet friends for coffee in the middle of the day, and occasionally travel around the world with my husband.

But last week I accepted a full-time Language Arts teaching position at a local middle school. I'm really looking forward to hanging out with kids full-time again, learning along with them, and passionately discussing books, writing, and words. Along with all the other things 13-year-olds find themselves getting up to. And I do think it was time for a change in my life, new challenges and hopefully successes. But obviously my daily life is about to undergo a giant shift.

I feel like I'm in a boat, watching the horizon change in front of my eyes, and madly trying to batten down the hatches, pull in the sails, and prepare for everything that's to come. But of course that's not possible. Rather, I should be enjoying the sea wind in my hair and settling down for a crazy ride.

I'm hoping to keep up with the blog, as well as the writing. But first I've got some maneuvering to do! Wish me luck! 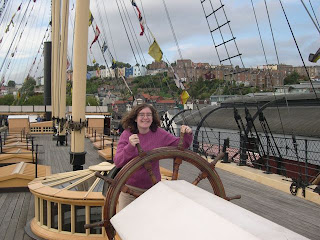 *Picture belongs to me, taken on the deck of Bristol's S. S. Great Britain.
Posted by Anne M Leone at 6:00 AM 9 comments 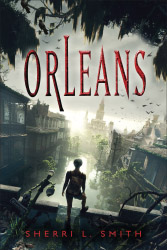 Orleans has been on my radar since before it was published, right after I read and loved Sherri L. Smith's novel Flygirl. But I didn't exactly rush out and buy Orleans. As popular as the genre is, dystopian titles have never gotten me overly excited. They seem all doom and gloom, angst against a repressive government that's more of a strawman than a legitimate, believable threat.

In an absolutely chilling opening, Orleans turns all of that on its head.

It begins in 2004, with a lone trumpet player standing on top of the levee, watching a coming storm, daring it to do its worst. He won't leave New Orleans.

On the following page is a list, beginning with:

Then there's Hurricane Isaiah in 2014, followed by Lorenzo, Olga, Laura, and Paloma, each becoming worse and worse. The list ends with Hurricane Jesus in 2019:

"Category 6 at landfall,
based on new Saffir-Simpson Scale
Casualties: estimated 8,000;
Survivors: estimated below 10,000"

Next are government documents, describing the quarantine of the Gulf Coast as Delta Fever breaks out, then the "Declaration of Separation" as the United States becomes the Outer States.

Do I believe this is exactly what will happen to New Orleans? No. But having lived through those terrible days following Katrina, I can certainly imagine all sorts of grim possibilities. At this point, I was totally on board with Smith, whatever followed.

The next section of the novel (titled "After") begins with Fen, a teenage African American girl, part of a tribe of O Positives (or OPs). This is where the book slows down a bit, as Smith tries to catch her readers up on a society where due to Delta Fever, everything is based on blood, not race. I have to say, I read several paragraphs over again, trying to understand exactly what it meant to be an AB as opposed to an O-Neg. Thankfully, soon the story was careening through the Delta again, and in context everything started to make sense.

And what a crazy, fascinating world Smith has created, unlike anything I've read before. There's one computer in the whole city, working via foot pedal in the library, there's a church in an abandoned Super Saver, but most of the churches are places of sanctuary, hidden in treetops. There's thick jungles, swamps, tribes of Blood Hunters, The Rooftops, which is a grassy plain growing over city homes. Be light on your toes, though, because the ground isn't so stable, and underneath lurks deserted bedrooms and living rooms filled with mold and giant alligators.

And did I mention the non-stop action, and break-neck pace at which the story flies through these locations? Orleans received starred-reviews when it first came out, and I know The Booksmugglers reviewed it (Verdict: "Damn Near Perfection!") but otherwise I've heard so little about it. Why isn't everyone and their mother reading this book?!

I also loved Fen, who soon into the story has a newborn thrust upon her, when she's really not the mothering type. For the first several scrapes, Fen fantasizes about depositing the nuisance baby somewhere, either in relative safely, or in hopes of an easy death. But ultimately, she becomes desperate to get the child to the world outside Orleans, where the child can grow up safe from everything Fen knows and fears.

On the surface, race has nothing to do with this story. Race is dead, the scientists believe, because now everything depends on your tribe, which is determined by your blood type. But in order for her baby to have a chance, and maybe even the city as a whole, Fen bands together with a bumbling, white tourist / scientist from the Outer States. Ultimately, they'll be forced to trust each other with their lives.

I tried explaining this book (okay, gushing about this book) to a group of people, and found them looking at me like I was the most grim person on Earth. But it's that message of trusting in others different from ourselves, and a desperate hope that things can change (plus, of course, the crazy, fascinating world Smith has created) that meant I couldn't stop reading Orleans.

Now I'm out to snatch up every Smith title I can put my hands on...

How about you? Read anything amazing lately?
Posted by Anne M Leone at 6:00 AM 4 comments 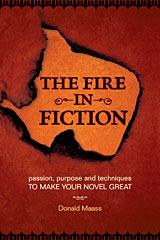 I recently finished reading agent Donald Maass' writing how-to book, The Fire in Fiction. His challenging, even combative tone put me off at times, and worse, sometimes I truly couldn't figure out what he was trying to show in his numerous fiction excerpts. Perhaps I'm just not a devoted thriller reader (which made up the majority of his examples). But all that said, Maass' book has some excellent, thought-provoking exercises that still made it a worthwhile read.

And in Maass' chapter "Making the Impossible Real," I discovered one of my favorite exercises ever:

"List twenty reasons why in the real world this event would not occur. Who prevents it? Who stops it?"

Twenty reasons is a LOT of reasons. But when I gave the Doubting Thomas portion of my mind free reign, it was rather easy to question everything. Wouldn't the girl's parents call a lawyer? Wouldn't that boy be afraid the police would get involved? Surely this highly sophisticated businessman realizes his actions are illegal. Would he really push the situation that far?

My stories usually begin with a single scene, and I extrapolate from this scene who my characters are, how they got there, where they'll go from here. It's a difficult thing to step back and say, "Wait, would that scene even happen like that?"

It's downright upsetting, actually, stomach ache inducing. But of course, Maass' follow-up question invites the writer to figure out why the event, or some slightly different version of it, actually does happen. Rather than patching together explanations after the fact, I love that I'm starting my new story by poking holes in it, questioning everything, and making sure all my answers are believable (if not 100% plausible!).

It's a new frame of mind for me, but one I'm definitely packing front and center in my writer toolbox.

Have you discovered any good writing how-to books or exercises lately?
Posted by Anne M Leone at 6:00 AM 6 comments

I hate it when idea insecurity strikes.

I'm just about finished with a thorough outline of my new idea. Sure, there's a few subplot kinks to work out, one of the antagonists is a little foggy in my mind, and the climax gets somewhat gnarly (meaning I'm not quite sure how it all plays out). But I've found those details usually sort themselves out in the writing, which I WAS about to start.

Then last week, I was innocently scrolling through Twitter, and saw BookPage's review of an upcoming young adult novel: A Wounded Name by Dot Hutchison.

"Set among the... prestigious boarding school Elsinore Academy, A Wounded Name opens after the sudden death of the school’s headmaster. Ophelia, a sophomore, knows that her father Polonius, the Dean of Curriculum, wants her to take her pills to keep her wild visions at bay, but other temptations beckon. The former headmaster’s son Dane, a senior, has the potential to become more than a friend. Dane’s mother quickly remarries to keep her position as chief hostess, the only role she’s ever known. Fellow senior Horatio balances studies with his devotion to his grieving best friend.

"A reader familiar with Hamlet will appreciate the way in which details from the play are translated into a boarding school setting...but what truly sets this retelling apart are the faerie creatures that only Ophelia can see and hear...they complement the story so naturally that readers might suspect that they were always there, just never mentioned. And although Ophelia still seeks final sanctuary in the lake, Hutchison undermines our assumptions about what awaits her under the water’s surface . . . and what might have driven her there. This is a highly recommended retelling by an author to watch."

I INSTANTLY added A Wounded Name to my LibraryThing list. What a COOL premise. What an Anne premise! So literary, mysterious, and magical!

My second thought? Why isn't MY new book that cool?

Sure, as the day went on, I remembered all the things I like about my new idea: it's a lot of fun, it's funny, the main character is perhaps the most likable I've ever written, I'm trying something new for me... But is it cool? And of course, more to the point, I'm getting old over here. Is it publishable? Is it the kind of idea that forces agents and editors to sit up and take notice?

I'm not sure. I don't have a good eye for those sorts of things when it comes to my own work. I wonder if I can get some of my crit partners to be painfully honest with me...

Anyone else suffer from the occasional idea insecurity? Do you plow through or go back to the drawing board?

By the way, on a TOTALLY different note, welcome back! I spent my summer vacation at my parents' cottage in Northern Michigan, reconnecting with family, some whom I haven't seen in years, and who haven't been all together in AGES.  And I welcomed my brand new, absolutely perfect nephew into the world, so I have to share! 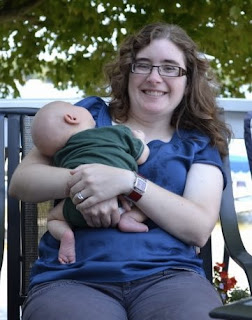 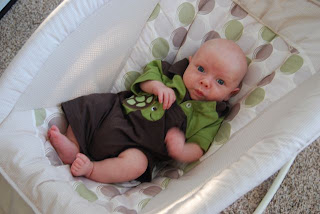